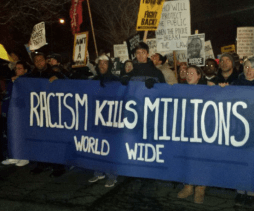 The permitted holiday march began with a rally at 5th and Bigelow, near the Pitt Student Union.

Many signs and placards decried racism and in glowing letters, for it was winter and evening fell early. Young and old came out. Drums sounded, booming low. Some horns, in a soft dirge. A few bicycle chimes.

The City Paper reported 1,200 participated in the three-mile march and demonstrations spanning from Oakland to Grant St., Downtown. A student observer estimated about 300 participants in the early going in Oakland, which was my own estimate. And of those, about 85% White. Both stats may have changed over the evening.

See also the P-G and the PIttNews.

Not all motorists were happy being rerouted up Bigelow Blvd. CMU officers manned the barricades against them END_OF_DOCUMENT_TOKEN_TO_BE_REPLACED 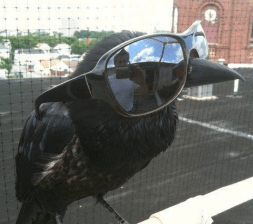 Today, we clarify all the region’s business.

In regards to public law and order, the Comet has five notes:

1. Howard McQuillan, representative of the Fraternal Order of Police Local 1 of Pittsburgh PA, does not like racism. He (and presumably those in his circle) was greatly pained at suggestions that there might be racism amidst the Pittsburgh Bureau of Police. That’s a laudable instinct, full stop.

2. The difficulty lies in ill communication over what racism is. I do not know what the Right thinks racism is. But the Left thinks of it like END_OF_DOCUMENT_TOKEN_TO_BE_REPLACED