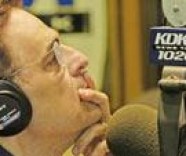 Proving again that historical preservation is an issue that can unite liberals and conservatives, KDKA’s Fred Honsberger recently interviewed John Quigley of the PA Dept. of Conservation and Natural Resources LINK, and Michael Nixon and Richard Lang with the Fort Pitt Preservation Society LINK.

When confronted by a “shocked” Hons Man on the propriety of “converting a historical park to carnival use,” Quigley reflexively and repeatedly cited local community input over forty public meetings, “at least one of which” dealt with historical issues. Nixon and Lang later disputed those points, saying the meetings were “by invitation only.” Besides which, no one in their “wildest nightmares” thought Point State Park renovations overseen by state conservation watchdogs would entail such liberal use of bulldozers.

It was remarkable to hear Fred so hung up on the cutting of trees. I’d like to note that there’s a fair chance that George Washington might have been tied to one of those trees, when he was captured by the French.