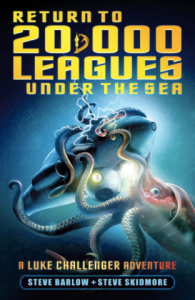 A good test of whether your Facebook friends are up to delivering your news is whether you’ve already read this must-read Guardian expose on Pittsburgh’s problems with “dookie water”, and Brian O’Neil’s piece in the P-G on how local authorities are in way over their head.

Here is some background to open up just how much deeper these water problems go, and how greed and corruption are a factor. First:

In 2008, PWSA borrowed more than $400m in variable rate bonds just as the market collapsed. This year, debt payments alone accounted for 44% of the authority’s operating budget. (Guardian)

Imagine falling so far behind on your student loans to a predatory lender that almost half your income goes to penalties and fees. Now try to pay rent, utilities, eat, and whoops fix your truck or buy medicine. That’s more or less going on with the fancy “Swaptions” deal that our Water Authority signed, and it’s hard to imagine our water pipes getting fixed under that sort of handicap.

Here are “Swaptions”, a portmanteau of “Swap” and “Options”: 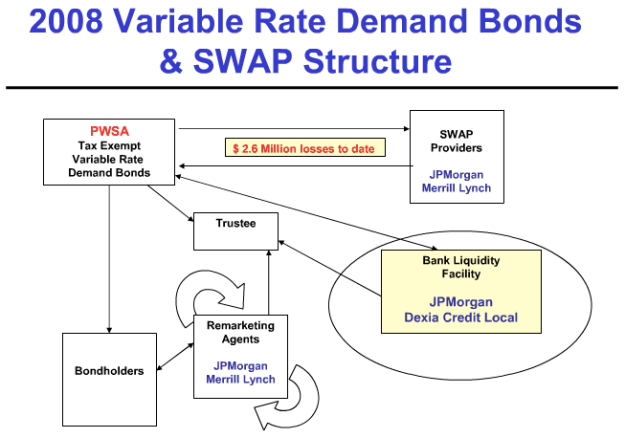 Basically, the investment banks JP Morgan and Merrill Lynch said, “Here is $400 million you can borrow, Pittsburgh! Now, since you owe us that money, we basically have it, right? So let us invest it for you. You pay some fees, but as we both make money the cost of your loan repayments go down. Sure if we lose money investing it, it will cost you, but that will never happen!”

Then the market melted down, and has never been the same.

At the time, it sounded like the City was going to decide they were cheated and hornswaggled by the banks and break the deal that will otherwise last until 2047. Then somebody asked then-mayoral candidate Patrick Dowd, “Who pitched the deals to the city?” Dowd answered “Greg Zappala and Mossie Murphy,” the record scratched, and nobody talked about that idea again.

After Veolia took over management of the city’s water, the chemical used to control corrosion of metals, such as lead, was changed. Typically, it takes months for a water department to change corrosion control methods, because changes can cause lead spikes. Feasibility studies must be conducted, rounds of testing completed, state agencies notified and their approval sought.

Instead, PWSA changed the corrosion control to save money in violation of state law, state authorities said. (Guardian)

The decision to switch this week appeared to surprise Executive Director Jim Good, who said Tuesday that the authority was looking at changes to how it controls corrosion.

“I guess we were further along than I thought,” Good said after an authority board of directors meeting Friday. (Trib) 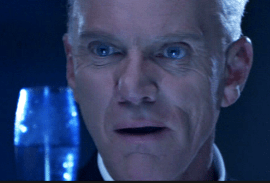 Sounds weird, right? How come Veolia, a global corporation that sells water like the villains from Tank Girl or Fury Road, was in charge of Pittsburgh’s water — and how come they apparently weren’t?

By 2011, there were so many scandals at PWSA, including a no-bid insurance deal that smacked of insider trading (resulting in resignations)  that the Ravenstahl administration tapped Veolia to come in and manage things underneath our public board. Everybody rejoiced, because at least some Very Serious People From Outside ™ were coming in, instead of the yokel political cronies who it was starting to seem always had been.

Bringing in a management firm with no political ties to Pittsburgh is part of a larger effort to restore confidence and trust in the authority, said state Rep. Dan Deasy, D-Westwood, chairman of PWSA’s seven-member board. (Trib)

However, the new leadership was not granted any power to replace managers or other employees. That just seems to me redolent of an Authority that can somehow alter its chemicals without notifying its director.

PITTSBURGH, PA (September 1, 2016) Mayor William Peduto announced today the formation of a task force to study the operations, financial condition and organizational structure of the Pittsburgh Water & Sewer Authority, and to recommend solutions to improve its oversight of stormwater management, lead levels, and other critical issues.

The work will be aided by the incoming interim director of the authority, Bernard Lindstrom, who is retiring this month from the U.S. Army. (Mayor’s office) 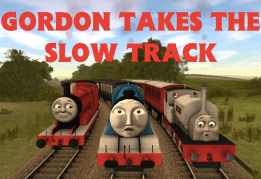 These problems certainly did not start under Mayor Bill Peduto. However we are 35 months into his administration, and we just now got the press release announcing a future task force.

For perspective, it took 20 months to move from the announcement of an Affordable Housing Task Force to a hearing on its first piece of legislation (this Wednesday), so we might look forward to the beginnings of serious discussions about taking some action in May of 2018.

Maybe he at first thought people would be happy living in a town drinking dookie water and drowning when it rains, so long as they could ride around in robots.

By 2010, the water agency was struggling with what seemed like an invasion of cancer-causing chemicals called trihalomethanes, formed when salty fracking wastewater came into contact with treated drinking water…

Unlike in Flint, Michigan, where sudden changes in water chemistry caused a spike, lead levels in Pittsburgh’s tap water rose steadily for 12 years, alongside cancer-causing chemicals from fracking waste. (Guardian)

It was chilling to read as reported fact not only that yes, fracking is unsafe, but also that it’s already soiled your own backyard. We thought maybe the jury was still out, and environmentalists were being alarmist and paranoid.

Our Democratic nominee for President says:

So by the time we get through all of my conditions, I do not think there will be many places in America where fracking will continue to take place. And I think that’s the best approach, because right now, there are places where fracking is going on that are not sufficiently regulated.” (Hillary Clinton, March 6 debate) 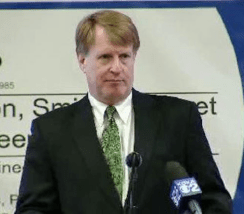 Allegheny County and Pennsylvania are still “for it”, water moves around a lot, and Pittsburgh is in the heart of Marcellus Shale country.  So we’re probably in trouble until those magic new fracking regulations preventing the contamination of water are present. Maybe since Southwestern PA is a swing region, once she eeks out her victory she’d be willing to cut a big federal check to our Water Authority so it can both pay off its Wall Street loan sharks and clean up the energy industry’s garbage, until those magic regulations come along. No wait — our Water Authority’s task force won’t have met yet. Perhaps better to cut the checks to people individually to buy water filters, or move.

No wonder they’re protesting in North Dakota. Pittsburgh shows that once something big goes wrong with the water supply, it won’t be easy to fix.

4 thoughts on “BEHIND THE DOOKIE WATER: Local Public Health Travesty Deeper Than You Think”