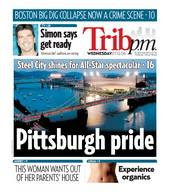 Prior to The Comet launch, I would eschew the Pittsburgh Tribune-Review. Less because their opinion page is more predictably conservative than that of the Post-Gazette is predictably liberal; but because those editorials and op-eds are embarrassingly nasty, brutish, and short. I also did not appreciate Dickie Mellon Cougar-Scaife’s hands-in approach during Lewinski-gate.

We have since come to rely upon Trib reportage, and today is a particularly good example of their strength in science writing.

Allison M. Heinrichs points up the potential for conflict between golden eagles and wind-turbines — did you know that “Pennsylvania leads the eastern U.S. in wind energy production, with more than 153 megawatts of wind power generated annually — enough to power almost 100,000 homes — and has several more wind farms planned”?

Also, Luis Fabregas showcases that “University of Pittsburgh researchers are fairly confident they have generated embryonic stem cells from cloned monkeys.” Although the study has not yet been peer-reviewed, the prospect of a breakthrough would be a coup for the region.

2 thoughts on “Breaking: Trib Not So Bad”