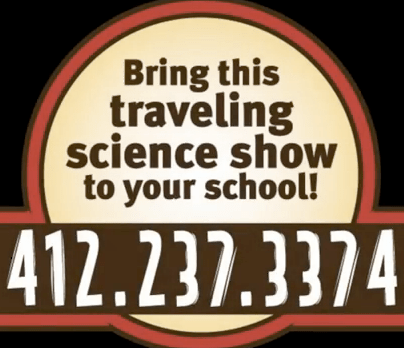 There really is no mistaking it. An Internet commenter already likened this to something that would happen to the Simpsons in Springfield. I’m looking out the window amazed everything isn’t brightly animated.

It’s tough to do the City Paper Slag Heap article on “Colossal Fossil Fuels” justice, but just regarding what is science — I remember being taught the law of conservation matter, that every action has an equal and opposite reaction, and that the two sides of an equation need to balance. So the topic of “waste products” would be pretty fundamental to any exhibition concerning energy production, right?

“The real goal [of the program] is to focus on the science,” [Equitable Gas president of production Steve] Schlotterbeck maintained. Geology and paleontology, he added, “aren’t really controversial at all.”

Asked about the controversy surrounding fracking, Marilyn Fitzsimmons, the Science on the Road education coordinator who created hands-on displays to accompany the program, said, “It’s more about the science. We don’t get into the political [aspect]” (Slag Heap, Bill O’Driscoll)

To review: Energy manufacturing = Science. Also: Dinosaurs = Science. But what happens to the dinosaurs after we’re finished with them, and other unintended consequences of energy manufacturing = Politics & Controversy. And of course: Science =/= Politics, or “Children don’t deserve controversy in their science, so let’s show them just half the equation, and let’s make it the business-friendly half where things get sold.”

“What we have felt from the Science Center perspective is that there’s not been nearly enough of the science of both the energy itself and where it came from and how it got there, but also how we get it,” [Carnegie Science Center co-Director Ron] Baillie said. (Essential Public Radio, Jared Adkins)

To hear the Science Center explain it, this is not about de-emphasizing or shelving the cautionary or less-welcome scientific trivium having to do with energy production, and nothing at all about the money coming in the door from Equitable Gas.