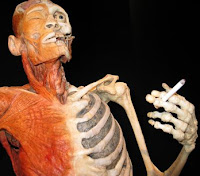 Allegheny County was dealt another defeat yesterday, when a three-judge state appeals court ruled that we do not have the authority to enact and enforce our own smoking ban.

No, this did not already happen. The courts had previously filed injunctions against the ban, until a future ruling. This was the appeal at the state level, and Allegheny County lost.

“If it’s a statewide ban that includes everyone, including casinos, I don’t have a problem with that,” Mr. Mitchell said. “Everyone knows smoking is bad for you. We’re just trying to protect our livelihood here.”

From the Trib’s Justin Vellucci:

“This is a victory for all citizens, because it means our rights haven’t been eroded,” said James Mitchell, who owns Mitchell’s Restaurant & Bar. “Do we want more government? Most people would say a resounding ‘No.’ “

“We enjoy the atmosphere of gritty, nihilistic rebelliousness that smoking affords us,” thought Mr. Mitchell. “We don’t want to have to look at those prissy Highland Park types. Plus, the dump trucks full of cash provided by R.J. Reynolds are a nice bonus.”

Allegheny County can still appeal to the Pennsylvania Supreme Court.

A state appeals court has already put the kibosh our very short-lived smoking ban, until it gets around to ruling on the appeal by two local restaurateurs. The P-G’s Anita Srikameswaran could make a career of this.

Eat n’ Park, the place for smiles, will allow five of its locations to remain smoke-free, said an official.

“We might be waiting forever for the state or the county,” he said. “We do believe in the long term the right thing to do is to go smoke-free. We need to understand what the impacts are if we do that by ourselves.”

Anita Srikameswaran of the P-G gets to announce that yes, Virginia, there is a smoking ban. James G. Mitchell of Mitchell’s Restaurant goes into history-onics:

“We faced the Prohibition, the Great Depression, the Great Flood and now we’re facing another possible threat to the survival of the oldest restaurant in Pittsburgh.”

The new most popular resource on the blurghsophere can be found HERE.

The P-G’s Mark Belko previews the showdown at the Planning Commission today, and reveals what the Steelers may be getting at:

He added that if some accommodation can’t be reached, one solution could be to close the casino during major events while a more in-depth traffic study is done. The science center now closes during Steelers game days.

The P-G editorial board endorses Ricky Burgess in District 9, calling him “head and shoulders above the rest of the field” because of his attention to our “massive debt and pension obligations.”

Meanwhile, the TRIB editorial board mercilessly cheers on the Port Authortity cutbacks. 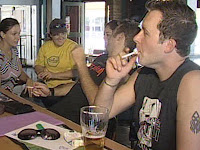 Today could be the last day for smoking in bars and restaurants, reports the P-G’s Anita Srikameswaran. The injunction against the county-wide ban expires at midnight.

“Until we hear otherwise, we’re going to enforce it and treat it as the law in the county,” said Kevin Evanto, spokesman for Allegheny County Chief Executive Dan Onorato.

But don’t throw out those ash trays just yet. Legal efforts spearheaded by Mitchell’s Restaurant and the Smithfield Cafe, and bankrolled by Big Tobacco, will continue through the 11th hour. The Comet will be following the story all day long.

County Solicitor Michael Wojcik expects that today Judge Della Vecchia may grant the request to extend the injunction. But because there is no timeline in which the higher court must issue a decision, the ordinance, at least with respect to bars and restaurants, could be in limbo for a while.

Establishments with fewer than 10 employees and less than 10% of food revenue are exempted from the ban; some feel this dilutes and confuses the law beyond workability. However, those businesses need to have applied in advance for the exemption; the list of successful applicants will be released later today.

The Comet is more concerned about simple compliance; surreptitious primary research has indicated that many tavern owners feel they have some scheme, or the right connections, to defy the ban.

Smokers themselves are more philosophical about the new law; it is well known that they enjoy feeling miserable and persecuted. KDKA quotes an Elaine Price of Hazelwood:

“I’ve already been pushed outside, and treated like a leftover shoestring so to speak, so it doesn’t bother me at all.”

Meanwhile, Eat n’ Park reports an increase in sales at those locations that have already gone smoke-free.