Bill Peduto is actually a pretty good mayor, as mayors go. If you don’t believe what I have to say below, google it, or google the things I’m writing about. Because I’m not providing links. Either you’ll know it already, or you’ll find out. Even though B-Piddy’s first term as mayor of Pittsburgh was awful hit-or-miss and herky-jerky (and he might be losing his majority on City Council) he is still worth going out and voting for today because he applies himself diligently to statecraft, is open to reason, has a lot of compassionate instincts, a lot of experience, plenty of know-how, is generally accessible, and has kept his administration free from any rank incompetence or sordid scandal, though not mistake and error.

That profile alone is a lot better than the Universe often likes to serve up, in terms of major executive officers.

Usually at this point, somebody objects: “What a low bar you’ve set, for our public officials!”

But is it really? Let us take a moment. No, really. Think about it.

Is Peduto a neoliberal? Well, he is being dragged in that direction. There is this thing called capitalism, which is presently in command of the means of production. 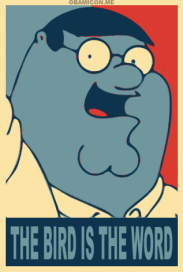 If I don’t vote for Bill Peduto today, that means I’m either voting for John Welch or I’m staying home. And if too many of people do either of those things (in this very sleepy municipal primary) then we wind up with Mayor Darlene Harris.

Now, Mayor Darlene Harris would be an interesting ride. There are fewer flies on her than many seem to realize. But her entire platform and constituency consist in hostile, specious reaction to progressive reform:  from campaign finance, to affordable housing, to reproductive freedom and many vendettas in between. I say “specious” because if she’s not any longer complaining about the Department of Permits, Licenses and Inspections, then she was probably crying “wolf” the whole time. So now when she says we need a “federal investigation” of the Water Authority, we can see another reckless overreach. What’s been going on over at PWSA over the last 3 1/2 years hasn’t been criminal, it’s just uncivil and unfortunate. 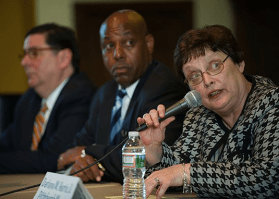 Rev. Welch is calling for a State of Emergency. Now that’s interesting.

Before we drown in our water woes, it’s time to acknowledge John Welch, who hammered away on matters of real urgency: our drinking water, livability for the poor, and corporate accountability. That urgency was as informed as it was disciplined and dignified.

Yet Welch seemed to have a such small campaign operation, for a big city like this. He was no doubt hampered by his inexperience as a political candidate, not to mention the incumbency advantage, and a field split unfavorably against him. If John Welch makes a mark on this election, it will likely be as a spoiler.

And I don’t want things spoiled. There’s a reason Peduto drew only small opposition over what not long ago was a highly sought-after office. Peduto appears politically and competently in charge; many people feel like they can work constructively with him, and it not end in embarrassment or outrage. That’s not always on the menu.

The Pittsburgh Comet endorses a second term for Bill Peduto. Go vote for it. Better that way, than backwards and uncertain. Let’s count our blessings.

Though Mayor Peduto has retained the public’s confidence, and some still cherish high hopes, he has frittered away a lot of the enthusiasm that leads to real political capital, the kind you can exert while governing. The Water Authority after all is only just now entering the “task force” phase. Note also how the Land Bank and affordable housing are taking conspicuously forever, and wonder what that means for PWSA. Nor does any “deal with the nonprofits” show any real signs of being around the corner. Meanwhile, if you’re on the supply side of things, you’re probably noting that progress in the Lower Hill and at the Produce Terminal seems very, very, very tentative at best. Add to this stew how the tenants at Penn Plaza were chased out yet the Whole Foods fell through, and you can see how nobody’s really thrilled. Maybe Nova Place is catching fire, but it sounds quiet. Even Almono is at a snail’s pace; the Oakland Transit Connector sure as heck didn’t happen; if anything that whole Smart Cities Challenge diversion generated more dissonance with Uber than anything. If he spent half as much time in the Run pitching the OTC as he did at the conferences with “innovators,” there would actually be those podraces in Schenley Park. It’s getting a little trite to ask, but is Peduto fundamentally a good “negotiator?” Let’s say the jury is out. He doesn’t always have great negotiating instincts. There had to have been a better way to engage the School Board in their superintendent search, than find himself so thoroughly alienated. He ought to realize that leadership in regards to our water infrastructure is going on MSNBC and talking about how bad these 5,000 cities have it, not going on the City Channel or Twitter to downplay it so defensively. There was no reason to put Chief McLay in such an uncomfortable position at the Democratic Convention and in front of OMI that we had to lose him so soon. There was no reason to sacrifice his defenders’ ability to argue for his integrity, by having his redevelopment chief exploit this one weird trick to hit up developers for bonus stacks of campaign cash.

You may take such impatience and dissatisfaction for so much whinging backseat driving, but it all adds up. While it is voguish to deride political idealism, rebellions are built on hope. I wonder what happens today in District 4 between Tony Coghill and Ashleigh Deemer. Is Peduto’s brand of progressivism still seen as vital and worth fighting for? Or after 3 years of seeing it in practice, are people more in the mood to give the technocratic idealists a break, and instead try something old? Who even becomes Council President if Coghill wins? I’m having trouble counting to five for Bruce Kraus, and that’s trouble for Peduto’s coalition. Without Rudiak to kick around anymore, Peduto allies like Kraus, Gilman and Gross, the so-called “progressives,” might find themselves on the outside looking in. And how would Peduto adapt to that? There’s a very real possibility that the great progressive reform wave in City Hall that began in 2007 might have already reached its high water mark. We’ll have to wait and see.

Either way, I want to see how Peduto finishes this…

… so if you’re still making up your mind, do consider making certain he gets the chance.