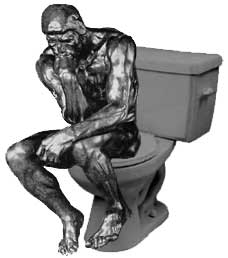 When justice is constipated, fissures develop.

“Here we are sweating in mid-August, and we don’t have it resolved,” said Tim Stevens, head of the Black Political Empowerment Project, a Hill District advocacy group. “If we cannot have justice in the beating of Jordan Miles, who in this city is safe from police abuse?” (Trib, Adam Brandolph)

Must-read background to yesterday’s petition delivery the Courthouse appears in this week’s City Paper. That article’s hook is that the three officers on leave continue to get paid, including considerable “overtime”. That may seem wrong, but it should become clear that that much is inevitable — they have yet to be charged with any wrongdoing.

Of course they’ve yet to be cleared of anything either, and therein lies the problem.

A worrisome Catch-22 that I do not envy at all. Yet maybe it should highlight the importance of the city doing its investigation of the incident well and getting it right, so that there will be no direct contradictions — instead of the city waiting on the Feds, who may be concerned with broader or deeper aspects which would explain the time being consumed.


“I don’t know what to say about this,” says David Harris, a University of Pittsburgh law professor who specializes in police issues. “It’s very peculiar.” (ibid)

Co-sign ‘peculiar’. This can’t be the first time a local government has faced this quandary.

One thought on “Communities Wondering over Miles Investigation”