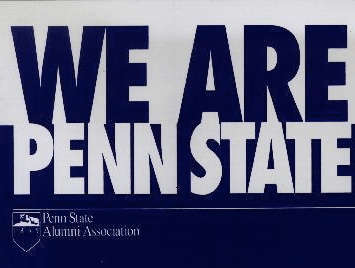 Casablanca PA is racking up four score and more comments for its explorations on daily news concerning the former Attorney General’s handling of the Jerry Sandusky rape spree:

Wow. Specifically asking a witness before the grand jury to withhold details? No follow up to key parts of the witness’ story? In fact, in December of 2010, Eshbach turned down interview requests from the York Daily Record, saying it would be inappropriate at that time, yet she conducted a Facebook survey about Paterno and made supportive comments about Paterno while the investigation presumably was still in progress? (Casablanca PA)

See also here, here, here and further back, tying it in (as the blog does) to the then-candidate’s political aspirations. We hope the Signor doesn’t receive another summons for this.

Capitol Ideas meanwhile delves deeply into the Governor’s recent moves to wheel back against concerns over the pace of the state investigation:

Gov. Tom Corbett said this afternoon that he was “very disappointed” that former senior Penn State officials failed to turn over e-mails and other documents that appeared in a sweeping report on the university’s handling of the Jerry Sandusky child abuse scandal.

Corbett, the former two-term attorney general who initiated the grand jury investigation that led to Sandusky’s conviction last month on 45 of 48 abuse counts, declined to say whether former Penn State President Graham B. Spanier – should be held criminally responsible for withholding documents that prosecutors sought through subpoenas.

But, he said, “I think that is probably the subject of an investigation in the Attorney General’s Office right now. (Capitol Ideas, John L. Micek)