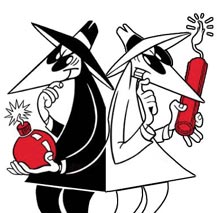 Two members of City Council, Ricky Burgess and Natalia Rudiak, each this week advanced pieces of legislation which would invite community groups from across Pittsburgh into formal and transparent public processes geared toward developing a six-year plan for allocating the City’s capital investment resources.

The dueling proposals are on track to be either constructively reconciled with one another prior to formal adoption, or else viciously contested in a scorched-earth battle prior to a mayoral veto.

The two bills share far more similarities than differences, although the differences are not insignificant: 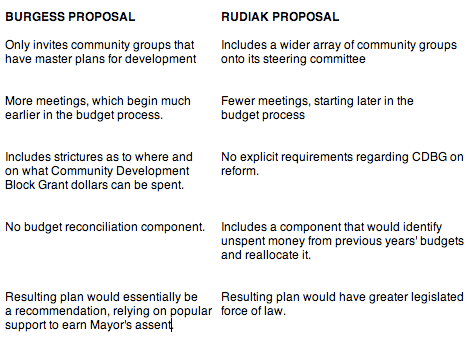 The legality (under the city’s Home Rule Charter) of any 6-year plan, under Rudiak’s scheme, possessing the force of law is somewhat at issue. Additionally, that facet (among others) makes her bill far more likely to earn a veto from Mayor Ravenstahl upon its passage — and without support from Burgess and like-mined members of Council, that veto will be upheld.

However, Burgess probably lacks the votes to pass his legislation at all without support from Rudiak and her respective like-minded members of Council.

It appears the only way this seemingly popular legislative push can come to fruition is if the respective sponsors reconcile their two bills. Officially, the two have agreed to place holds on their legislation and are attempting just such a mediated reconciliation. Yet the bitterly combative course the debate has already taken suggests this could be a token gesture by one or by both.

##
Councilman Burgess was first out of the gate in unveiling his legislation with a news-conference on May 20. As of that date it was reported he had not discussed his proposal with others on the Council.

Accounts differ as to whether Burgess later reached out to colleagues for their input; whether Rudiak instead tried to reach out to Burgess to offer suggestions; and if so whether Burgess was at all receptive to that input. Therefore, characterizations differ as to whether Rudiak’s introduction on June 15 of her own legislation was a “complimentary” attempt to add her ideas to the discussion, as her camp suggests, or a “hostile” co-opting of Burgess’s issue as suggests his camp.

Be that as it may, the next day on June 16 Councilman Burgess held a second press conference to promote his legislation. This time he was accompanied by the leadership of B-PEP and a host of other community groups, most of whom lauded the CDBG reform element of his proposal in resounding particular. Here is Part 1:

And here is Part 2. After this was done, and after many who attended the press event spoke in favor of Burgess’s legislation during Council’s public comment period, Burgess took some time out during the Council session out to critique aspects of Rudiak’s proposal. That critique was forceful enough to prompt Councilman Bruce Kraus to speak out against the preemptive “firebombing”.

As previously stated, the two councilors later agreed to temporarily hold their own measures pending an attempt at reconciliation. Councilman Peduto stepped in to the breach with the intention of mediating, tweeting as much, though politically speaking a wholly neutral party between Rudiak and Burgess is hard to divine.

1. As previously stated, the two bills must be reconciled if either measure is to succeed (or if either party is to be considered a success at legislating).

2. The two principals need to meet face-to-face in order to accomplish this. The ardent representation of lieutenants will only make things worse. Far. Worse.

3. It’d be best for now to strictly limit the number of third parties in that room. Bring in the community representatives once all which does not most directly concern them is settled. Otherwise you’re just displaying the size of your uh, political support.

4. However a well-intentioned mediator of some standing is very necessary. Peduto would seem to be a good choice, but if that doesn’t work consider maybe Smith, maybe Dowd. I’m sure Dowd is starving for this kind of work and he’d probably do a very earnest job.