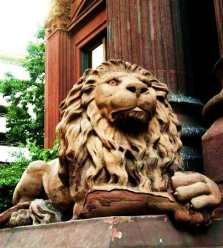 UPDATE: Belay that headline. The foundations bought the Center from Dollar.

At length it has come to this:

But two days later, International Investigative Services, a Bethel Park firm that provided security at the center, filed an appeal with the state Superior Court to claim more than $200,000 owed by the center. The three foundations would not close on the deal until the appeal was settled, setting up Monday’s court date. (P-G, Daniel Moore)

It is possible that the bank merely is holding the property to increase its influence over the future entity which will go on to operate it as the August Wilson Center for African-American Culture — which theoretically, could be an appropriate check and balance in this state.

Or Dollar could be eager to find a more lucrative use for the property.

Most likely, it will wait and see what comes.

Real life stories often do not come with morals; this is just a bunch of stuff that happened. But if this were an August Wilson drama, and if the curtain were to fall around now, the lesson might be don’t stop believin’.

RELATED: They talked about Lower Hill redevelopment at City Planning today; I heard it clarified that the Community Collaboration and Implementation Plan will be “referred to,” more so than “followed.” And you should probably vote today.