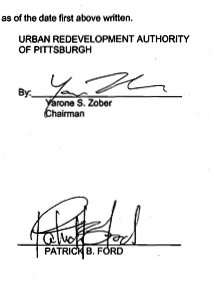 Pursuant to a written Right to Know request filed with the URA, the Comet has obtained a copy of Pat Ford’s employment contract with the city authority.

I am resigning from my position as Executive Director of the Urban
Redevelopment Authority of Pittsburgh (No. 6 of contract) effective
the end date of my contract term. Per the term of my contract, I
expect to be compensated for the remainder of 2008 (No. 3 of
contract).

No. 3 of the contract does confirm that the “expiration date” for this present term is Dec. 31, 2008. The contract automatically renews annually unless one party or the other notifies the other in writing of its intent not to renew.

Now let us take a look at No. 6 of the contract:

6. Termination: Either party may terminate this Agreement for any reason by giving 30 days advance written notice of its or his intention to do so to the other party at the address set forth in the caption of this Agreement. If, however, the Authority terminates this Agreement prior to the Expiration Date or any extension or renewal thereof, as the case may be, without Just Cause, it shall pay Ford an amount equal to one year’s salary based on the annual salary paid to Ford on the effective date of termination (the “Severance Payment”). The Severance Payment shall be made to Ford no later than 30 days after the termination date. Ford shall also be paid for unused personal and vacation days in accordance with the Authority’s personnel policy.

Ford will be provided with a written statement of the reasons for termination if this Agreement is terminated for Just Cause.

“Just Cause” shall mean actions by Ford which constitute willful misconduct, fraud, criminal actions or such neglect of his duties as Executive Director that results in serious adverse consequences to the Authority.

Now. In a post the Busman is currently in the process of assembling, Mr. Ford’s attorney says:

Pat Ford has resigned from his position as the executive director of the Urban Redevelopment Authority. In other words, he has reached the inevitable and invariable conclusion that he will not return to that position with the city.

Since it is the Ford Camp’s continued position that the State Ethics commission will inevitably and invariably clear Ford of wrongdoing, one might assume that Ford’s resignation was either involuntary — meaning, he was ordered to resign (one background source confirms this CORRECTION: 8/31/08: one background source indicates this) — or he became convinced of his impending dismissal, and so acted to head it off in advance.

Note however that he “expects to be compensated” for the remainder of 2008, meaning another $38,333 or so in salary. If the URA terminates his contract at its upcoming September meeting “without Just Cause”, it would be on the hook for an entire “severance package” worth $115,000.

If the URA attempts to demonstrate Just Cause for an early dismissal, thereby saving the taxpayers of any expense and themselves of a gross political liability, it would have to notify Ford of the reasons for doing so in writing — something which surely would become public one way or the other.

If such a letter were to reference any business conducted in his capacity as Executive Director, Mr. Ford could always respond, “You told me to do that. I reference you to a meeting / telephone conversation / e-mail we had on such and such a date. Here, let me look through my briefcase.”

If such a letter were to reference something in the gift-accepting or inappropriate relationship vein, Mr. Ford could go the Peter Griffin route. “You think that’s bad! Remember the time that…” Then he opens another briefcase.

“The slanderous allegations that are being made by Mr. Ford, in an attempt to clear his name, I think are unfortunate,” Ravenstahl told KQV Radio… (Trib, Jeremy Boren)

Slander is a kind of willful misconduct, fraud or criminal action, i.e., Just Cause.

Then again, the most efficient defense against slander accusations is a Truth Defense. Which is why Pat Ford is still probably going to get his $38,333, even considering the way he just maligned his bosses and the entire Authority (Amusing: see ADB).