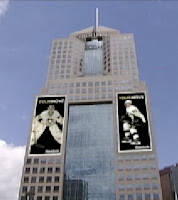 “They were great people and I enjoyed them immensely,” developer Susan Eastridge said yesterday. “However, the thing is, they don’t know how to make something like this happen.” (P-G, Timothy McNulty)

“We still clearly believe in this project. It’s a fantastic location. When the credit markets rebound, that will allow us to move forward again. But we have to re-evaluate,” [Pittsburgh Cultural Trust CEO Kevin McMahon] said last night.

We may be waiting for some time. As we understand it, credit markets are collapsing because for too long, too much money has been lent by creditors with too little diligence. Eastridge’s scathing analysis may in fact be a case in point as to why this unfortunate market adjustment must occur. New normal, anyone?

“We’re thinking of filing unfair labor charges against him,” Mr. McMahon said, claiming Mr. Onorato has “backed himself into a box” by insisting upon contract cuts to help justify his support for a controversial 10 percent drink tax and $2-a-day car rental tax to subsidize transit. (P-G, Joe Grata)

Standing in a dimly lit corner of The Carlton restaurant yesterday, Michele Burchfield, executive director of FACT, outlined the “top 10 untruths,” that Mr. Onorato and supporters of the drink tax have put forward since the levy was proposed and approved last year. (P-G, Karamagi Rujumba)

It just seems like Onorato has more than his share of enemies, doesn’t it? No wonder he’s branding himself as a fighter. Little choice.

After initially asking the city Law Department for a ruling on whether he could accept free tickets as part of the trip, Mr. Ravenstahl decided yesterday to pay for all expenses out of his own pocket, spokeswoman Joanna Doven said. Tickets to the first two games will cost him $350 each. (P-G, Mark Belko)

Phone calls and e-mails made by the Comet to the office of Mayor Kwame Kilpatrick, inquiring as to whether or not he plans on attending any Stanley Cup Finals games in Pittsburgh as a representative of the City of Detroit — and if so, how those junkets will be furnished — have as yet gone unanswered.

It sure looks like he’s running to us. (P-G, Diana Nelson Jones)

BONUS GAME: Tell us what to think about this story, and we’ll buy you a sandwich.

4 thoughts on “Friday: A Banner Week”