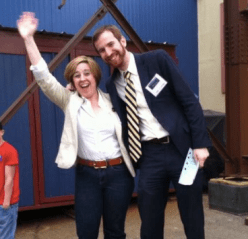 Rep. Readshaw is tartly informing people that this blog and its contributors spent the better part of two months lobbying for “Governor Corbett’s massive gas tax to fund Philadelphia,” when we could have sworn we were rescuing Pittsburgh’s own mass transit from a figurative death spiral, and countless PA bridges from something more literal. Hence, we will go ahead and surprise no one by endorsing Rep. Molchany for South Pittsburgh as well.

One might think this should be a slam dunk, despite the unfavorable 30-70 turf split resulting from redistricting:  a youthful, social-media utilizing, Peduto & Preston backed wonkabilly insurgent, versus a crusty and out-of-touch on “social issues” (AKA basic civil and human rights) perma-incumbent who’s never benefitted from the exercise one gets from facing serious challenges. We’ve seen this one play out almost a dozen times in recent years. The only way we can see it changing today is if the progressive coalition has grown lazy and overconfident in its newfound sense of power. We got where we are by treating every election as an existential crisis — can we still tap into that life-or-death fury?

We have options for what to do with the Produce Terminal in the Strip District! Welcome to what is called the Catbird’s Seat. Perhaps we can even play these contenders off against each other in a public benefit Lightening Round?

The P-G’s Tony Norman has an idea on how to make the August Wilson Center more vibrant, which is better than Bob Hoover’s idea. I was going to say, what really inspired Wilson was the blues & jazz, that is, if we really want nightly sell-out audiences.

It’s a shame this is the year that national party conventions need to rely on local funding. I bet if corporate sponsors filled in the difference, we could score the 2016 Democratic Rodeo in a heartbeat. Just think how many speakers would have to get up on stage and stoke our ego!

The City Paper offers up another great and depressing story on Police Bureau disciplinary arbitration. Bottom line: negotiations with the FOP are coming up soon, and Katie bar the doors.

The new CPRB nominee is getting such rave reviews, a surprising many are wondering quietly whether he mightn’t be a strong choice for Public Safety Director. Such a switcheroo would indeed be politically feasible, if those who know the situation in far greater detail find it advisable.

At the Citywide Public Safety meeting in Lawrenceville this week, we learned that what was once known as “Weed and Seed” is being brought back, expanded, and renamed to “Safer Together,” which might indeed be a more politically inclusive emphasis. Also the PIRC is undertaking a new project called “PIRC Movement”, a support group for ex-offenders we’ll be telling you more about.

The good press just doesn’t stop. We are leading an urban progressive revolt, don’t you know. We host one of the hottest techno dance scenes in the world, tempting Internet writers toward out-of-context and exaggerated link bait. We are critically acclaimed as disruptive. We are still livable. We are the fifth-fastest growing startup hub in the US. Bruce Springsteen can’t get enough of us.

Next week, we’ll finally take a gander at those crazy gubernatorial candidates, and maybe get back to Mod Pitts. Something about those upcoming labor negotiations are giving us hype.