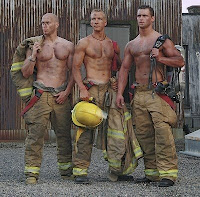 “It’s a point of stability on the street,” said Nick Daemous, an antiques dealer who lives across the street from station No. 35, which would see its pumper moved to Marshall-Shadeland under a new plan. “The situation in this neighborhood would be significantly worse if the firehouse wasn’t there.” (P-G, Rich Lord)

Stop being so emotional. This is about economics and managing decline. That firehouse is crawling with asbestos anyway. It should have been closed years ago!

On Orchlee Street, Marcia Brown hoped the city takes its time, and leaves the station a few houses away open.

“We need them up here, because they’re the best,” she said as her kids splashed in a front yard pool. “They’re always on time.”

Always on time for what, Marcia?

The next motion was to approve a $16.9 million dollar loan from Fannie Mae for phase 1 & 2 of the Garfield Heights project. This is the same project that ex HACP Board Chairman Pat Ford claims is bad. Hopefully Ford is singing like a bird to Michael Lamb and his auditors in his office. (Pittsburgh Hoagie)

We don’t understand any of this Housing Authority jazz, we’re just passing this along. Didn’t Our Hero also claim to have reported some major outrages to the District Attorney before he went on the lamb (no pun intended)?

Two, when Councilman Peduto attempted to discuss section 513 of the City Charter — the provision that explicitly allows for council to take the action that they did — Specter quickly changed subjects and Patrick Dowd jumped in to distract the discussion. (The Burgher)

We only caught bits and pieces of this council session on the City Channel. Does this sound accurate to anybody else? Because Section 513 does read an awful lot like it vindicates, at least legally, what the Lamar Four are trying to do.

While that is going on, the media is catching on that the Majestic Star financing mystery may be reaching its climax. I will just point back to what I said in some previous posts 1) Don Barden and Gary and 2) Where in the (financial) world is the Majestic Star. To me the key question is not whether he gets his financing or not. I wonder whether the interest rates he appears to be forced into at this point make the casino a viable business venture no matter. Nobody has really looked at that in depth. (Null Space)

There is a two-thirds baked theory out there that the Riverlife Task Force et al (emphasis on the et al) were being obstructive during the approvals process precisely so that Barden would encounter these predictable financial difficulties, and be forced to sell a sizable chunk of the casino to their own politically connected chums at Harrah’s. If this was actually the case, they may have overshot the mark, eh?

2 thoughts on “Friday: Playing with Fire”