To my way of thinking, here is the scariest scene in the movie Gasland: 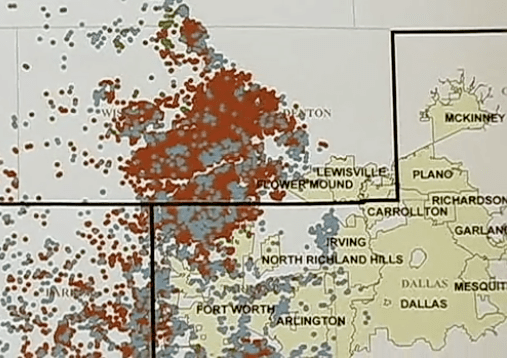 A map of the Dallas / Fort Worth / Arlington metroplex. Red dots indicate gas drilling / frac sites within that region’s Bartlett Shale — not individual natural gas wells mind you, but “pads,” or sites which may contain up to ten wells.

So there’s no drilling whatsoever “in” Dallas, or in Arlington, or seemingly little to none in Fort Worth. There’s just a massive carbon goiter attached immediately to the north and east of these municipal boundaries. We could debate the demonstrable or assumable hazards of drilling whatever these might be — to water supplies, to the air, to the landscape, to humans — but it seems we can infer that the cities will be impacted almost the same as if the wells were in the cities proper. Water and air are like that.

Now, here is the scariest thing I’ve read recently in a newspaper:

The ordinance will allow drilling in commercial or industrial zones in the township but not others. Most of the areas are located around Route 19 and not residential areas.

But some people who attended the meeting said the ordinance should include more rural areas of Cranberry to allow landowners the opportunity to profit from drilling. (P-G, Lindsay Carroll)

There has been some excitement over new proposed drilling regulations in the City of Pittsburgh and whether these are “the right ones” or “good enough” — as well there ought to be. Yet in a sense, in isolation, that hardly really matters.

It doesn’t sound as though Allegheny County will be inclined to be nearly as restrictive as Pittsburgh on even its best day. And we can be certain that the Commonwealth, despite the noblest intentions of Sen. Jim Ferlo — which actually possesses legitimate straightforward legal authority to regulate drilling, unlike local governments — will be even less inclined to act protectively, seeing as how it is populated with honest-to-goodness, sometimes reflexively pro-business, environmentally skeptic Republicans, frequently comprising a majority. And the nation as a whole, despite the noblest intentions of Sen. Bob Casey, seems out-to-lunch on this one.

So here we are. We are the City, we only have any real influence right here, but it doesn’t matter because we cannot — either legally or practically — effectively regulate.

Unless Pittsburgh somehow gets it together to demonstrate, beyond reasonable doubt, that certain fracking practices are detrimental to the public’s health and welfare — in which case we should be able to legislatively disallow those exact uses. Not to disallow “drilling” mind you, only the certain uses of X’s, Y’s and Z’s on our turf.

If we can accomplish that successfully — and it might take some time — word should spread fast. Fast enough not only to inspire other local governments, but also to make statewide or national actions more likely, and garner a significant amount of the kind of attention we love.

That’s the kind of thing Pittsburgh might actually be good at. We are a nexus not only of land use attorneys, but don’t forget also of universities, of science and research, of nimble communicators and civic activism. To an extent we’re an outpost of global civilization in this Marcellus Shale area, the “Paris of Appalachia” as some might put it.

We can’t do the deed alone, but we might if we harness the efforts of absolutely everybody in the country who is also working on aspects of this, arranging these efforts in concert — including folks presently studying the aftereffects of gas drilling on communities surrounding the very first shale fracking sites out west.

We are known to talk at random intervals about “reaching out” and “starting movements” and “leading” and “cooperation”, but the fact is that’s really difficult, and time- and resource-consuming; far easier to talk about than do. But theoretically, it’s possible.

Alright. We’re getting way ahead of ourselves. First we start looking at the kinds of things claimed in Gasland and what the natural gas industry and others say in response, and how that all comports with our common sense. I’m sure a lot of you have been thinking, “This is crap, there is no problem here, let me make money off my own land and create energy and jobs.”

16 thoughts on “GasBurgh: Where Best to Focus?”