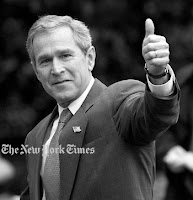 Liveblogging the President’s State of the Union Address 2008.

Why do you suppose those are applause lines these days?

9:04 Everybody looks bored. Honestly. Bush promises no nostalgia. Figures; it’s the only interesting thing he could do.

9:07 Teddy and Barack, snickering and giggling together… hey, it’s Dick Cheney! Haven’t seen his mug in a while!

9:10 Aw, he sounds nice coming out of the gate! Vigorous debate, the strength of self-governance, competing for votes and cooperating for results! If Karl Rove had been exiled earlier, he might have been a decent prez!

9:11 Oh, now he’s plunging without warning into how perilous our economy is. Well, no sense dwelling on his many accomplishments…

9:13 This Congress must pass the agreement you both already agreed upon as soon as possible! That’s telling them!

9:14 Bushie tells a joke about making the tax cuts permanent. The right half of the room is unamused. Ooh, it’s actually more like 2/3 of the room! That’s encouraging.

9:15 One Hundred and Fifty One Arabian Wasteful or Bloated Programs Under the Sea

9:16 If you do not send me an appropriations bill that cuts the number of earmarks in half, I will veto it. (Applause). Public vote on it all. (Okay, we’re with him in theory).

9:17 He started something called the Hope Now Alliance? Is Barack Obama going to sue for copywrite infringement?

9:19 Barack Obama looks thoughtful and displeased in re something ominous about government control. Actually, it looks like he’s smoking an imaginary cigarette. Mmmm … Kools!

9:23 Sigh, we always wanted to go to trade talks at Doha…

9:24 Oh good, major agreement with Columbia, a friend of America! Must defeat purveyors of false populism! YELLOW FLAG! RED FLAG! BLACK FLAG! We know nothing about this agreement except that we must repudiate it with lethal prejudice.

9:25 In support of an international agreement that will slow and reverse the emission of greenhouse gasses. In theory. Not in favor of giving any countries (ie China) a free ride. Check out the big nuance on George!

9:28 Is Nancy Pelosi reading the Tao of Pooh?

9:29 Wants to ban the patenting, buying, selling, or cloning of human life. Intuition: reasonable. Explanation: subject matter creeps me out.

9:30 ALL UR JUDGES WILL STAY UNCONFIRMED KGOODTHEN…

9:33 We are deploying fences and advanced technologies, but we need to find a legal way to exploit cheap Mexican labor. We would have booed.

9:36 Horrific images. Grim reminder. Terrorists and extremists. Evil men who despise freedom. We will deliver justice to our enemies. Dick Cheney at last rises from his chair like Dr. Strangelove.

9:39 Gratitude of a nation. By all means. Pat yourselves on the back, all of you. Okay, sit down.

9:44 With the amount of time and attention he is giving directly to our front-line military in this speech, you don’t suppose he’s preparing for a military coup, do you? Just sayin’.

9:46 One Marine Expeditionary Unit is coming home, and will not be replaced. Also, something else. This is good. (It does kind of tip your hat to the enemy, if that’s what you’ve been worried about this whole time … oh, whatever. Good President.)

9:48 Bush is describing the political progress being made in Iraq. Cheney is looking upward like, well, not really.

9:51 Now he’s talking about the Holy Land. Didn’t realize Wylie Ave. was on the agenda.

9:52 He’s still saying nucyoular. We thought this wasn’t going to be nostalgic.

9:55 Liability protections for companies involved in homeland security spying and whatnot. We need it by Friday. SOUNDS SKETCHY. A very partisan applause.

10:02 We actually rather like the whole We the People bit. Catchy hook at the end, too.

10:03 Bush makes a beeline to shake hands with Obama, we are telling you this election is already over…

10:10 Ah, the old boy is taking forever and six weeks, signing autographs, slapping hands and cracking wise, having a grand old time. It seems a little needy perhaps, but what harm is there in it? History is history and you only get it one way.

4 thoughts on “He’s Telling Us For The Last Time!”