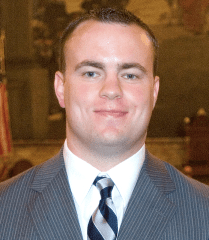 “Harrisburg itself is pretty frustrating,” he says, noting that he co-sponsored legislation to shrink the size of the Legislature. “Republicans control everything, and in that same regard, the partisan politics is pretty unfortunate in my opinion.” He says the two sides of the aisle don’t talk or mingle as much as they used to.

“There is a lack of respect,” he finds most irritating. “A lot of time we’ve been cut off from debate.”

Debate can be a touchy subject, however. Ravenstahl was attacked in 2012 by Democratic party challenger Mark Purcell for not personally taking part in House floor debate in his first term.

How about since then?

Clarifying he does not mean to cast aspersions on anyone in particular, he relates that “Someone once said, ‘Before PCN started filming, there was a lot less speaking.'”

Ravenstahl emphasizes that he is “active in the streets, at neighborhood clean ups.” He notes that with no children, “that enables me to get to some things others can’t get to.”

“The argument that I haven’t been visible or active, that’s always been wrong,” he objects. “And I have a 100% Open Door policy.”

Ravenstahl sits on the House committees for Liquor, Finance, Aging and Veterans Affairs.

“Negotiations are still ongoing, more toward modernization than privatization,” he says of the state liquor stores, a direction which he favors. The Republicans already tried to privatize them and it’s “probably not going to happen.”

Another hot issue in the past term has been transportation funding — which came through, albeit in a form he could not support.

“In my opinion it was unfortunate how it all went down — I would have voted for Senate Bill 1”, before the repeal of some prevailing wage restrictions inserted by Republicans. “A compromise could have been reached with union folks at the table. It was just a further attack on the middle class.”

Statewide and countywide, House Democrats were split on the issue.

However, he says he is pleased with the road, bridge and public transportation funding — and is content with other changes recently made to the Port Authority’s board governance.

“I think the bill that passed, it’s a good starting point,” he says. “A regionalized approach — anything can and should be on the table.”

Like other Democrats, he would favor an increase in funding for public schools, which would have a “dramatic impact on losing teachers, increasing class sizes.” But at the same time, as an example, “North Allegheny is receiving a heck of a lot more than Duquesne,” speaking to a need to re-think the entire public education funding system.

Ravenstahl is proud to be a co-sponsor of House Bill 300, which would legalize gay marriage in Pennsylvania. He is proud to have joined in co-sponsoring House Bill 1890, supporting equal pay for equal work. He is very proud to support the Pa. Agenda for Women’s Health, which his colleagues have worked on, which includes among other things protections for “nursing mothers in the workplace”.

“I’m pro-life,” answers Ravenstahl, in response to a follow-up query on such issues. When asked to explain, he demurs. “That’s just something that I believe.”

He clarifies than even still, he supports exceptions (some would call them “loopholes”) to any abortion restriction including instances of rape, incest or the health of the mother.

Pound for pound, Ravenstahl says his office receives more calls on the UPMC/Highmark dispute than any other issue. Consequently he has cosponsored bills in the House which would force a “pact” between the two.

Does that have any chance of passing?

“For it to pass, the Governor needs to get involved,” he forecasts. Tom Corbett has his own reelection bid approaching.

After chewing over the latest in the public education debate — Ravenstahl thinks “it would be a shame” if we lost the Gates grant, although believes teachers’ “front-line” experience is crucial in helping determine how to apply it — there is little left for us to discuss but politics.

Out in the streets, or door to door, Ravenstahl admits that conversations about his brother Luke can predominate, but “a lot of the conversations have been pretty positive — he’s done a pretty good job. If you look at where the City was then, and where it is now.”

“I saw [Mayor Bill Peduto] a few times in Harrisburg,” says the State Rep. “I guess it was a few weeks ago. Obviously, he didn’t get along with my brother, that’s no secret, but obviously that doesn’t have to impact us.”

He is unsure who is getting involved in the coming political contest for his seat — he hears “rumors” — but he’s acting pretty nonchalant about the prospect of a dynastic showdown.

“I’m not trying to bash my brother in any manner. But we’re just two different people.”