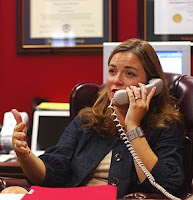 The state budget deadline arrives on July 1, and legislators are scrambling in an attempt to get it done on time this year.

Since this is an issue of limitless interest to the Comet, we decided to place a call in with State Representative Chelsa Wagner at her offices in Harrisburg, to get the inside scoop.

Turns out, she could use the same kind of assistance.

“The whole way the budget is brokered in Harrisburg, it’s brokered between about 15 people,” she says. “It’s ridiculous.”

As for the major outstanding points of contention, she believes Democrats may be fighting to raise the limit on capital projects, but even that’s just “speculation.”

“The budget process is somewhat indicative” of problems with an overly large state government, split between two houses, she says. As another illustration, she has been pushing a bill to reform the Port Authority board, but has discovered it typically takes an incoming legislator literally 7 to 8 years to get motion on a new bill.

“Frankly, I think that’s part of the frustration Lisa Bennington came up against,” she said, making reference to her fellow freshman representative who, citing disillusionment, announced that she will be bowing out after one term.

So what about that Port Authority?

Right now, the 9 member board is entirely appointed at the County level. Rep. Wagner’s bill would reapportion the board such that 5 members come from the state, in recognition of the greater financial outlay the state is making.

Such a split would also lead to “better decision making,” citing for example the decision to leave the former office to move Downtown, at significant expense to the Authority, but bringing little or no benefits.

We asked then whether it wouldn’t make sense to reserve at least a seat on the board for a city-level appointment, seeing as how the city is the hub of the transportation system and the core of the region. Although she agreed, “I think it would be a great idea,” she pointed out that since city government does not contribute financially to the system, it would be a hard argument to sell.

Speaking of the Port Authority, she also remains opposed to the drink tax — although contends that that formulation is really a misnomer.

Going so far as to call the connection between the drink tax and public transportation “deceptive,” she also contends that the drink tax is the wrong tax for the region.

“As a young official, I don’t think you want to portray that image,” going after an industry that actually makes us “vibrant” and attractive.

As to city issues, we asked if there will be any aid forthcoming from the state to address our financial challenges, considering that every local pol is pleading with Harrisburg to deliver more relief in one way or another.

“I think the City is in a better position right now, but there’s still a lot of noise” about unfunded pension liabilities, says Wagner, which are the bigger concern.

Surprisingly, when asked whether she would be in favor of amending Act 55, she suggested that it actually “does not preclude the city or the county from taxing nonprofits,” if you read the fine print.

“I think the number one thing that sticks out” about our situation “is there’s no unified financial system for city government. You can’t say what it costs.” Wagner would push to put all the authorities and everything else on one concurrent financial system.

“If you want to be cynical about it, it’s kind of a shell game,” she contends, citing as an example the ability to move City Planning positions to the Urban Redevelopment Authority — and then poof, the financial outlook for the City looks better on paper.

“One thing I’ve learned in this position is to be very skeptical of how numbers are presented,” she said — and she waded for a moment into the Schenley High School debate.

Wagner mentioned that she was placing a call in to Superintendent Mark Roosevelt to make some inquiries and do a little light lobbying; obviously it was to no avail.

“I think the arguments that it’s bricks and mortar is kind of a miss,” she argues. Although not a Schenley graduate herself, her friends attended the historic high school and she “desperately” wanted to join them, but her parents had a Catholic education in mind for her instead.

So what about this city-county merger? Is it a potential solution for these financial woes?

“We don’t know very much about this proposal,” Wagner points out. “The Nordenberg Report is very vague, almost intentionally vague.” She calls it more of a marketing report.

“What advantage does it provide city residents? Right now, I only see disadvantages.”

Wagner is on board with some of the preliminary recommendations in the report — a purchasing compact between the city and the county, and the merging of some services. That would be a “real functional kind of regionalism.”

She cites city and county detectives as one example, complaining that city residents are right now “paying double” for the same services as other county residents.

So can we expect to confront this question as a ballot referendum anytime soon, as some city and county officials are pushing for?

“No, not at this point, I wouldn’t think that many of my colleagues would support it.” A referendum for the merger would require enabling legislation at the state level.

“Right now it would go to a pretty open-ended referendum,” and she doubts the state would be up for that. Basically, she describes a scenario in which voters are asked approve a merger of some kind, and to empower the mayor and the county executive to hash out the details down the road. This is a big pill for other stakeholders to swallow.

So can we expect anything from our ponderous, oftentimes difficult state government?

Campaign finance reform, of all things, is coming up for hearings in Harrisburg in the fall. Her colleague David Levdansky, Democrat of Washington and Allegheny County, is proposing legislation that includes spending limits that are actually more stringent than those narrowly approved by Pittsburgh City Council.

What did Rep. Wagner think of that legislation?

“I thought it was fair. I’d like to have seen it enacted.” She didn’t think the objections raised by opponents of the legislation held a lot of water, for reasons commonly discussed.

“There’s really nothing you can do about that” constitutionally, she said of millionaires self-financing their own campaigns, for example, pointing out that they can just as easily do so right now.

Finally, we asked Chelsa Wagner the same question that Diana Fisher did. We got the same answer, of which we had roughly the same impressions as did our fellow analyst Bill Green.