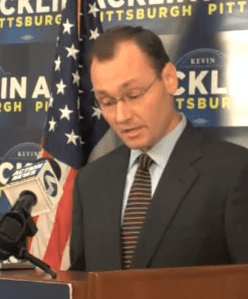 In the words of Kevin Acklin (or whoever is putting words in his mouth) yesterday:

When you look at the decisions this administration has made in the last three years — closing down city planning, firing Ron Graziano and almost totally gutting BBI, moving all of the city’s economic development policy into the URA — there’s a clear move toward crafting policies that are favorable to corporate developers. And John Verbanac is driving that move. (YouTube)

That fact is demonstrated beyond a reasonable doubt. You can use buzz words like “streamlining” and “vibrancy”, or you can talk about “moving in the right direction”, but the policy has always been about making boatloads of money for a very few individuals.

Now we all know how it came to be.

People on Brookline Boulevard have been waiting two decades for redevelopment. Pittsburghers on the North Side have been screaming at the top of their lungs for a meeting with the Mayor. People in Beechview have been waiting for years for action and development in their business district. People all across the city have been waiting for months for leadership on our library issues. None of these people get their questions answered. But John Verbanac makes one call, or sends one email, and he gets instant access to, and influence over, everything that’s happening in the Mayor’s office. This administration is focused on personal and corporate favoritism, and it’s hurting our neighborhoods as a result. (ibid)

That is why our Mayor’s extreme reliance on investor / developer / political consultant John Verbanac, or if you prefer the few Verbanacs of the world — legal though it might conceivably be — is very very bad news for Pittsburgh. Every day, they’re moving the city in harmful, heartless, irresponsible directions. And they know it.

That’s why they try so hard to cover their tracks.