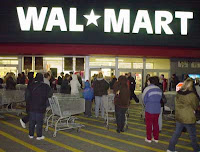 “If a developer is not submitting the proper reports to the state it’s alarming,” Mr. Davis said. “When the state says you’re deficient, you’re not holding up your end of the bargain, and that’s not a good business decision.”

This Mr. Davis is a Wal-Mart spokesperson. He spoke with Don Hopey of the P-G regarding state D.E.P. threats of “follow-up actions” against ASC Development and Kilbuck Properties LP, who have failed to provide sufficient engineering data and stabilize the site near Rt. 65. The developers have yet to respond to these warnings. Sections of the property continue to move about a foot a month.

“I’m not confident they’re going to be that aggressive against them, because they haven’t been that aggressive with them in the past. They’ve allowed them to self-police until recently.” says Bob Keir of Communities First!, according to the Trib’s Karen Roebuck.