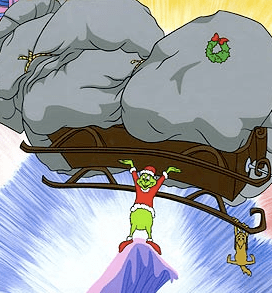 Some items of note been coming crost the blag-o-wire:

2 Political Junkies posts a tweet by Sue Kerr relaying an 11 PM KDKA-TV news report that Officer Hlavac has been terminated by the Police Bureau (bckgrnd). I know that’s a long way to go but I can’t quite believe I don’t yet see it confirmed on any news outlet’s site. *-UPDATE: Clarification, of sorts.

**-UPPERDATE: This is the story (WTAE)

Infinonymous highlights — literally and figuratively — the import of a quote by the defense attorney for state Sen. Jane Orie. The whole idea of a defendant being able to pursue that particular avenue of discovery seems fanciful and a bit impractical. Still — if the D.A. is seen to back down off of Orie now, after that has been said, then confidence in the D.A.’s office will never be the same. Or will remain exactly the same, depending. So it’s kind of an interesting moment.

Null Space points out helpfully that The Rivers Casino bonds are currently trading at rubbish bond status with no particular cause for optimism in sight. I wonder whether The Great Recession has more to do with the poor performance than anything, and as soon as we experience The Great Recovery along with all its Lagging Indicators then everything will be alright, or at least not quite so scary.

The Slag Heap offers a typically smart post-mortem on the Tuition Tax debacle. The post seems to evaluate the episode’s utility along two avenues: how much cash money the City received (we don’t know if that’s even been worked out yet but we’re assured that it’s “more”) and the degree to which it shook up the system and will provoke further attention (we can’t possibly know yet, only predict). And then it reaches the conclusion that both “sides” — Luke and Good I suppose — will try to spin the results to suit their own purposes, but the truth must necessarily be somewhere in the middle. Wherever the author is, for example.

Allow me to illustrate two other avenues by which the misadventure did damage:

One is that it sacrificed too much of Pittsburgh’s moral high ground in its continuing and very necessary attempts to secure revenue. It ought to have been easy enough for the Little City That Could to win hearts and minds against cash-soaked medical centers and insurers, ever-expanding universities, or even oblivious commuters — but to choose as our target “students” and “education” and “cuteness” surely soured a lot of neutral Pennsylvanians, and even Pittsburghers, against these efforts. It was as though we attempted to knowingly stake out the moral low ground. And now, folks are ill-disposed towards the Money Grubbing City That Hates Youngsters, just when we need sympathy most.

The second is simply that, according to the Mayor’s victory-tale, he bluffed and outmaneuvered the non-profits into making concessions. Yet he did so extremely publicly. And so like the — like the Grown Man Who Cried Wolf — this will necessarily erode his political trustworthiness down the line. The next time he rolls out a major initiative, or threatens action, people will wonder, “Yeah, but what’s he really getting at? What’s his angle? Is he serious this time?” That hesitancy could add real friction to other situations.

I don’t want to oversell all that, though. The fact of the matter is, the New Pittsburgh Coalition — for all its present foibles — is the best vehicle we have going. What we should do, if we are serious about expanding the city’s sovereignty and tax base in the face of these horrendous challenges, is commit this New Pittsburgh Coalition to our memory: editorialize on what a great idea it is, remind ourselves to keep reporting on it somehow, keep asking hard questions of its members, and treat it with anxious hope and guarded optimism for months and months to come. Embryonic as it is, it is nobly enough conceived and could yet grow to do the trick.