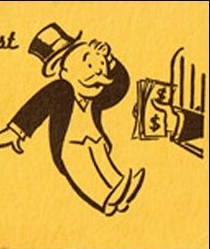 “This is once and done,” Mr. McAneny cautioned.

“The law requires that the money be put into the pension,” he added. He acknowledged, though, that some municipalities may decide that the increased state aid allows them to put less of their local tax money into the pension fund next year. (P-G, Rich Lord)

Then it couldn’t have come at a better time, if say, one wants to avoid doing anything rash such as raising meter rates and expanding enforcement. We’d be worried about what Rich Lord was doing poking around Jim McAneny’s office in the first place, but still.

Spending on roads and other infrastructure (parks, garbage cans, playgrounds) are the coin of the realm in municipal government. One might note that the budget announcement on the two years of capital spending comes the same week as Luke Ravenstahl’s moves toward reelection . . . in two years. (P-G Early Returns, Tim McNulty)

What interests us most about this, if it passes and is transacted, is there will be no more talk about reaching the Debt Cliff in 2017, or indeed about ending our Credit Card Mentality. There may be no way around it, though. That guy in the McNulty piece wasn’t pointing at a broken swing set or the lack of a cotton candy machine.

Is anyone else bored with this? WE ARE SO BORED. That’s it: there will be far less stuffy financial and budgetary analysis in this space; few care, and for excellent reasons because apparently almost none of it is real. Take for example the indispensable Null Space’s perpetual incredulity. Is anyone else reaching the conclusion that politicians intuitively understand something fundamental about the real world that economists and even attorneys do not? That somehow it’s turtles all the way down? There’s always a bigger fish? No damn cat and no damn cradle?

The city is nearly a quarter poverty-stricken … public education and public transit are bad and getting worse while our prospective leaders compete over who can best trusted to starve government … and our public charities are engaging in profit-seeking terrorism. How much did we leave out? There have got to be stories there which are likely a bit more satisfying.