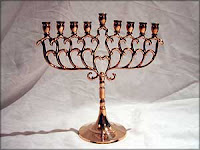 A little data, before we head off to an Asian food restaurant …

We really like this time of year when Hannukah menorahs, or Hannukiahs, start sprouting up everywhere around the city.

We especially like when they are lit, one by one, for the eight days of Hannukah … plus the one of course for good measure. Very niice.

We’re not so wild about all nine candles remaining lit afterwords, every night through New Years.

There were these people, see, they were called the Maccabees.

They and their whole religion were holed up in this temple, and they were like, under siege.

As we understand it, even under those conditions, it would have been wretched poor form to run out of oil. They needed oil to light the sacred candles. Also possibly, to cook, and to see. Maybe to heat up and dump on the heads of Greeks.

Yet lo and behold, the small backup reserve stash of sacred oil lasted for eight whole days, and eight whole nights. Which was exactly the time needed to save Judaism from utter destruction. (You know, again. We’re like the Jean Claude Van Damme of civilizations.)

In other words, Pittsburgh, to keep those electric miracle-candles aglow any longer than the proper eight days, is not only a waste of energy but borderline sacrilege.

It’s nice to have dreidels scattered about everywhere! You know, those little tops.

Fun for children to play with — and for adults, several decent drinking games.

Giant pictures of dreidels on the walls are sort of unnecessary. That goes for most of the blue and white trimmings as well. Still, if it makes you feel any better, then go right ahead.

Do you know what would be awesome? Do you have an office building?

Place a small Hannukah menorah, or Hannukiah, in every office window.

Of course, then you would have to keep track of all nine candles over all eight nights, getting it right on each occasion. That would be a chore, unless you do some fancy programming…

Honestly, don’t worry too much about us. You’re doing fine. Just turn on and off lights as needed.

A happy toast, but a very solemn toast. One person says it, and then the whole group rumbles it in chorus.

That, as they say, pretty much says it all.

Not surprisingly, after a good L’Chaiim, there are generally a few beats of silence. Cracking wise immediately after a L’Chaiim, for example, would be dreadful poor form.

5 thoughts on “Notes for the Goyim”