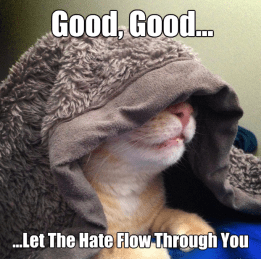 Demand is booming for all sorts of political products, and everyone deserves to be able to pay the mortgage. Don’t hate the player, hate the game; show you understand that “game” by slapping backs and handing out participation trophies.

On the Internet in particular, anger itself has become a signifier of defeat, and happiness a badge of general fitness and status. “U mad, bro?” And don’t positive people live longer?

The thing is, blogging in a black fury sure did get results sometimes. And it’s difficult to write something unique and interesting about politics without crushing somebody’s ego. We might struggle mightily to couch things in perfect care and compassion, but dancing between eggshells is so exhausting that sometimes it doesn’t seem worth it to write anything at all. It feels like we’re living in a world made of cardboard. And if we’re being truly honest, isn’t there an enormous amount to hate in this world? 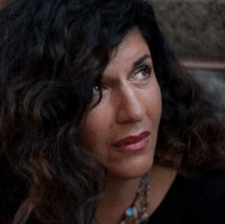 All of which is throat-clearing before further exploring my reaction to Salena Zito’s latest column in the Tribune-Review. She sweetly invited me to e-mail her my concerns, but we think it may be more productive and fun to hash it out right here.

Dodging raindrops and balancing bottled water and a bunch of power bars under one arm, a young man returned to his car at a Sheetz gas pump along old U.S. 40 in this western Maryland town, sandwiched between Pennsylvania and West Virginia.

The local public radio station blared through the open car door, reporting on the letter to Iran from 47 Senate Republicans. Adjusting his seat, he said to a traveling companion: “Good for them.”

“Wait, who?” his friend asked.

“The guys who sent the letter to Iran, that Cotton guy,” he replied. “For all we know, the president will issue an executive order and give Iran whatever they want.”

Then he shut the car’s door and drove east toward the U.S. 522 overpass.

An Obama-Biden sticker was plastered to his rear bumper. (Trib, Salena Zito)

Prior to this, it had never occurred to us how often Zito allows unnamed or only-first-named people to voice her theses.

Do I have any proof that there really was no such public-radio-blaring, once-proud Obama-backing, swing-region voter who succinctly criticized the President about the very two things Salena needed to write about this week, loudly enough to overhear, right next to her own gas pump? Nope, nothing but conjecture.

There are certainly more than enough details in her tale to suggest this was a really real moment which really happened, though — raindrops, water bottles, powerbars, Sheetz, US 40, US 522, overpasses — we practically feel like we must have been there!

So we could be wrong. Why are we mad enough to risk being wrong?

Because this isn’t about Zito being more conservative than we, or liking Obama any less. It isn’t about the Senate Republicans’ letter, regional stability, war, peace or treason. 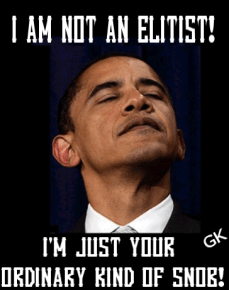 This is about Zito having the gall for the 400th week in a row to tell me that my feelings and perspective are elitist, Beltway-insidery and somehow not representative, whereas her attitudes (and those of the “increasingly alienated moderate Democrats” she perpetually manufactures) are Main Street, salt-of-the-earth and somehow invisibly in the majority.

It’s a slimy, chauvinist argument, it’s utter nonsense, it’s her very favorite, and it has nothing to do with plotting a wise course for the nation. Since she’s smart enough to realize this, it suggests that she also wouldn’t be above making up unverifiable stories about how Democrats are getting fed up with the Democrats.

In fact [and I forget where I heard this, but somewhere I read that] Republicans are generally actually the preferred party of the very, very, very rich and elite.

But that’s not my point. I enjoy wrestling with conservatives on matters of policy. I watch Fox News far more often than the alternatives, because it’s more constructive to be challenged than to nod along with the choir. I’ve even developed a thin conservative streak, when it comes to education or certain regulations.

Some time around January of 2000, I learned that our nation is almost supernaturally polarized, stably divided between a left and a right, and that the two halves experience life very differently. It has been borne out in every single election since then, nationally, across the state and regionally. It’s a fundamental law of nature already.

To insist constantly that things are really otherwise — that there is an essential, vast but ineffable rightward American majority, or that the left’s leaders are always relatively more out-of-step with both the center and its own base — is just rude. It’s schtick. It merits ridicule.

Back to the alleged conversation at Sheetz: apparently, Zito has some additional relevant information regarding it. She can relay it here in a comment, or on Twitter if it fits. If she can defend that, and can diagnose how I really am delusionally aloof from the majority of our Democrat-weary country, then we can be better friends.