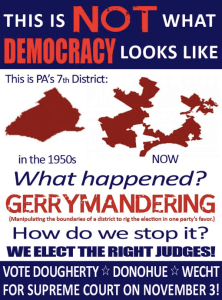 Tuesday is Election Day, and the bone-chillingly urgent contest is for the Pennsylvania Supreme Court.

You are going to want to vote for Kevin Dougherty, Christine Donahue and David Wecht. You can remember that by remembering the mnemonic device, “DODO WECHT“.

One reason this is so crucial is not only because those are the 3 Democrats in the hunt (crowd cheers!) but because of gerrymandering: the cutthroat process by which states determine how their congressional and legislative district boundaries will be drawn.

Here are the stakes: 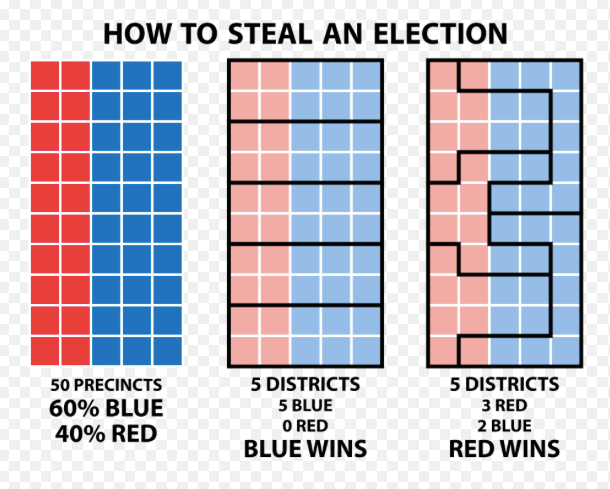 The PA Supreme Court is a train wreck at the moment, with 3 vacancies and the balance of power up-for-grabs.

Aside from the many problems related to judges being forced to run for office like partisan political doofuses, Pennsylvania is one of the most absurdly gerrymandered states… 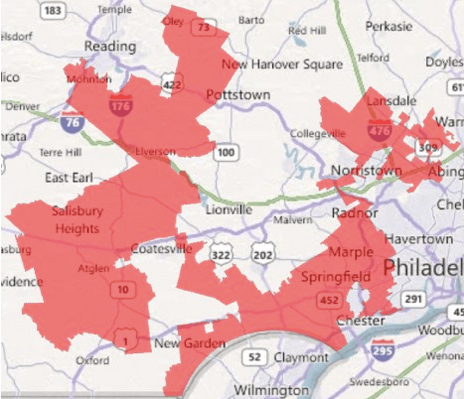 … and thanks to the 2010 Republican landslide (crowd boos), it is gerrymandered towards a decided GOP advantage.

But wait, there’s more. While the minority party gets the shaft whenever there is one to give, once that’s off the table gerrymandering benefits incumbents generally — and the most senior, entrenched incumbents especially.

Since gerrymandered districts are drawn with the maximum proportions of Democrats or Republicans within them, the politicians representing these twisted districts have little incentive to moderate their positions, show any nuance or be meaningfully independent. That is one reason we wind up with whackadoos contributing to pointless, dangerous and endless standoffs at both the national and state levels.

So to be frank, the poster above-right is not entirely accurate. Voting for Dougherty, Donahue and Wecht will not “stop” gerrymandering. It will however reverse bad Republican gerrymandering and possibly even start some healthy Democratic gerrymandering.

Want to do even better? Me too.

It’s hard to get a reform movement going, because not only do almost all incumbent officeholders benefit from the status quo, but everyone who works for them either in government or on campaigns appreciates stability in their lives. And it doesn’t intrinsically benefit business, labor or any special interest. That’s a lot of people who know what they’re doing. But maybe after enough ridiculous government crises or a full-blown catastrophe, common-sense reform will gain some momentum. 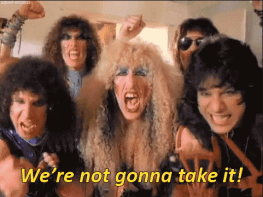 The Supreme Court ruled in favor of an Arizona independent citizens’ commission, so we know it can be done.

There is a bill in Congress seeking to make that type of independent commission mandatory for federal map-making.

In Pennsylvania, Rep. Ted Harhai (D-Westmorland County!), introduced a similar bill just this summer. Why is this guy not a celebrity? Go on, be one of Harhai’s Heroes!

If you have the wherewithal and standing to sue the bastards, you might be able to convince a court to overrule a badly gerrymandered map with reference to a metric called the “efficiency gap”. Worth a shot.

Computer algorithms might be part of the solution. Or, if you’re from Pittsburgh and want to sex it up, “robots”.

In the meanwhile if you can’t beat them, join them! Better Democrats should mander our gerry, than wind up gerrymandeed upon all over again.

So remember, DODO WECHT:  Dougherty, Donahue and Wecht. And whatever you do, be you Republican, Independent or Libertarian, don’t vote for Mike George.

18 thoughts on “On Tuesday vote “DODO WECHT”, and Your Guide to Gerrymandering”