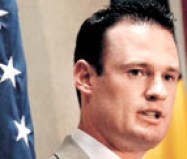 Wouldn’t it be nice (he’s thinking) if, sometime this afternoon, before the three-day weekend, I could hold a celebratory press conference with Mario Lemieux? Franco Harris is not getting the job done.

Wouldn’t it be nice (Don Barden and Ron Burkle must be thinking) if Luke finds himself desperate to hold a celebratory press conference with Mario Lemieux?

Isn’t it a fact (everyone must be thinking) that preliminary injunctions against former operations directors are simply too inside-baseball for voters without the same dozen blogs in their favorites folder?

Would it seem opportunistic (Bill Peduto must be thinking) if, after letting Luke stew in these juices over the long weekend, I went and picked Tuesday to officially announce?

Isn’t it a fact (the Comet is thinking) that such a notion is really, really too inside-baseball?

The P-G’s Mark Belko recalls Dennis Regan saying he “had no involvement” in the transfers of police officers including Rende, despite the sworn testimony of Police Chief Dominic Costa that Regan had involved himself on three separate and escalating occasions.

Belko also has Ravenstahl saying, “There was no rule broken, no law broken. If anything, maybe bad judgment was used,” perhaps opening the door just a hint of a smidgen toward the notion of settling with Cmdr. McNeilly out of court.

A further indication of the Mayor’s possible Proudly-Backing-Away posture is this quote obtained from WTAE: “(Regan) worked for Mayor O’Connor, and Mayor O’Connor gave him the ability and authority to do what he felt was appropriate. Most of these actions and allegations took place under Mayor O’Connor.”

Meanwhile the Trib and Jeremy Boren go for the throat with the headline, City Solicitor’s Probe Blasted, focusing on the presence of City Solicitor George Specter at some of those Regan-Costa meetings.

No major news outlet seem to have posted a recent editorial on the matter.

One thought on ““Perhaps There Was Misjudgement””