Mayor-E….. Mayor Bill Peduto more or less perfectly trod that tricky line line between stating his positive intention that the City is going to work hard, deal squarely and in good faith, say its prayers, eat its vitamins and be a real American — without looking askance as though to say, “For a change folks, am I right?”

Peduto before speaking more or less bathed himself in former Mayors — Ravenstahl, Murphy, and fitting representatives of O’Connor, Calijuiri, Lawrence. It was nice how outgoing Mayor Ravenstahl stayed through the entirety of the program. Seemed not even to have any entourage.

There was a reminder late last week in the Toprani report of some of the scandalous issues that helped bring this leadership transition to pass in the way it played out. As we remind ourselves of what is on the record and remember the scope of failures in oversight and culture, we will find a lot of characters in that story besides Mr. Luke Ravenstahl. He was a character — and that’s for sure! — but Pittsburgh was truly the main character, and it was an anti-hero my friends. Pittsburgh did all that, and now Pittsburgh is looking itself in the mirror and getting psyched for change.

First would needs come some sort of montage. Peduto delivered on the montage. Next comes the bell, and if it’s a good movie, a whole lot of punishing rounds.

Check out what somebody at the Tribune-Review did: 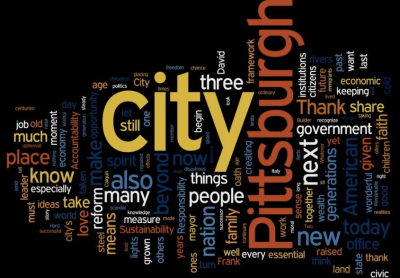 Three cheers to Chris Potter of ye olde City Paper picking up on a signal in regards to Councilwoman Deb Gross earning the Chairwomanship of City Council’s Zoning and Land Use Committee, in this stage of development along District 7’s own Allegheny Riverfront and proposals by the Buncher Company.

It looked like new administrative transition legislation was introduced in Council. Do any of you journalists know the last time Council submitted legislation at its initial swearing-in and organizational meeting? Submitting legislation is merely handing over an envelope, it takes weeks to process preliminarily — but I wonder how bold a stroke it is in terms of prodding the City to attention. Are we looking at a Kraus Means Business meme? Funny how that could overlap.

There has been some meditation on “New Pittsburgh” and “Next Pittsburgh,” not to mention #NewPittsburgh and #NEXTpgh.  Let the Comet proffer at this time a focus on

Pittsburgh deserves MOAR Pittsburgh. As long as this community is feeling all high-minded and civic and whatnot, let those of us who publish or broadcast, yak, fiddle or entertain, devote a certain MOAR of our time, sweat and treasure to Pittsburgh — whether that be the region, or the municipality, or a cherished neighborhood or community.

And as we in our many informal and commercial forums examine, deliberate, and contemplate Pittsburgh, let us not only feel that weight of intergenerational responsibility to build and sustain, but let us exult MOAR in the lifting of it. Let us host forums wherever we are hosting forums with excitement and optimism. And as we do so, let us be sure the general welfare of the Pittsburgh community and its denizens and constituents inhabits our hearts.

We “do Pittsburgh” in all ages, usually quite well. The Comet simply proposes that we all according to our capacity “do Pittsburgh,” and do it right, just a little MOAR for a couple years — and see how it feels. Give the weighty aspiration of the project a full head of steam.

Because heaven help us if our Mayor has to do it alone.