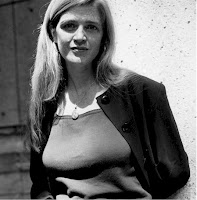 Most of us know Samantha Power as the Barack Obama staffer who called Hillary Clinton a “monster,” then asked that the remark be considered off-record.

Samantha Power was Obama’s chief foreign policy advisor, or at least one among several, depending who you talk to.

Power was a frequent guest on the Charlie Rose program,which is how we got to know her as the Genocide Lady, for her writing and reportage on the global genocide beat.

Elsewhere on YouTube is footage of Ms. Power, apparently stopped on the street by a reporter, apologizing profusely for her comments about Sen. Clinton. She describes herself as a “political rookie” who is very sorry.

Now, here is the meat of the post. Here is Samantha Power in earlier, happier times, rooting and roaring for Barack Hussein Obama at a rally on Feb. 2nd 2008:

She gets better as she goes. By the end, she is making the strongest case for Barack Obama, and one that should strike fear into the hearts of neoconservative swine everywhere — a working legislative majority.