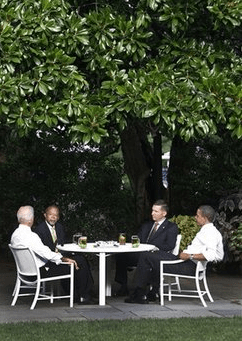 No. Gates and Crowley plan to meet again in the coming weeks to deal with the actual dispute. In the meantime, the photo was all politics, an image of four men at a table drinking beer, a symbol instead of something real. The beer was important because it stood in for the substance. “What happened?” your coworker will ask at the water cooler. “They had a beer,” you will say. As the comedian Stephen Colbert observed after the darkest days of the previous presidency, “No matter what happens to America, she will always rebound–with the most powerfully staged photo ops in the world.” So it was, again.

The photo op can be a particularly nefarious beast for a healthy democracy, where issues are supposed to be resolved through debate and transparency. (TIME.com Swampland)

And it goes on like this at considerable length, and it’s correct as far as it goes, but I’m left thinking:

The Race Relations, Law and Order and Beer Summit today sent one crystal clear message by all three men involved: “That public fracas we had three weeks ago? It’s not really that bad. I don’t actually think these are bad people, and maybe I shouldn’t have said some of the things I said.” A healthful and necessary enough signal to the American people without having to parse words and overly-define things.

I’m also left thinking, “Isn’t it high time various political rivals and beefers in Pittsburgh got it together at least sufficiently to stage a phony Beer Summit photo-op?”

6 thoughts on “Speaking of Beer and Politics”