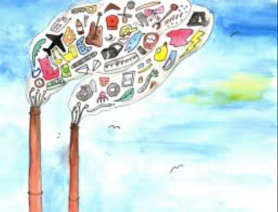 The Democrats’ last presidential nominating contest was held in 2008. How long ago was that?

We were only just starting to write about these strange, alarming new creatures called “blogs” — all without once referencing “Facebook,” or “Twitter”.

Obama’s “Yes We Can” video spread like wildfire through the blogs upon YouTube, much as Bill Clinton’s saxophone solo did on television sixteen years prior.

There were no hashtags, few memes, and your friends’ parents, your boss’s vendors and your former side pieces were not in your “news feed” fact-checking each other regarding the Trans-Pacific Partnership.

Today, we live in another dimension. We have evolved. Or at least we have mutated.

Fear was the order of the day since the dawn of this debate process. Fear of ISIS. Fear of radical Islamic terror. Fear of Hillary Clinton and Obamacare. Fear of illegally immigrated Hispanics. Then later, fear of losing the White House to those militaristic fear-mongers and theocrats. Fear of declining wages, debt, poverty and inequality. Fear of state violence and a “school-to-prison pipeline.” Fear of guns, fear of warfare, fear of climate change, fear of socialism. Fear of white supremacy and political correctness and the Koch brothers and Goldman Sachs.

The human mind is attuned to identify threats. Our minds are now augmented by the Internet. We feel we are in a threatening new environment, and are stressed.

Politicians build campaigns around our fears. In fact our two major parties have been and are are once again being refashioned around base sensitivities to threats. We end up with candidacies tailor-made to make us feel safe against these threats, strong in the face of them, and righteous toward condemnation.

We end up watching the news and the Internet all the time, as a rabbit who feels most safe nervously and attentively monitoring threats — and occasionally snapping at other rabbits and woodland creatures.

What are the antidotes to fear and stress? Love and assurances? Hope, and change?

Donald Trump will never be President. Many in the GOP establishment will contrive to run another candidate, just to hold that brand’s convictions as distinct by example. And it’s a long time between now and November; a lot of people don’t want him to win. The talented Mr. Trump isn’t as close to the White House as he thinks.

Meanwhile, Mr. Trump’s cohorts have been sensing something awry with the conservative agenda for a very long time. The bailouts drove them to launch the Tea Party, and trade deals are Trump’s touchstone issue. These folks are taking a different path from a different place, but those are signs of class consciousness. Once this debacle runs its course, progressives need to get creative in mending fences with the targets of their self-righteous scorn. Fundamentalist economic conservatism is cracking up, and from the sounds it is making it is long overdue. Either Democrat should be able to usher in a new era of progress as President, with an expanded presence in Congress.

Sen. Sanders’ movement is already underway, intersecting with the other movements. That much overdue class-consciousness and optimism cannot be put back in the bottle. We are only playing dice over the speed of the turning of the tides, the shape of the waves and how well we ride them.

Most Americans want change, meaning a competent system for stable, equitable prosperity and lots of help for children. There are good reasons why we feel so deprived, frustrated and inside-out, from our founding as a laboratory for radical free market corporatism to the “Super Tuesday” primary front-loading arrangements invented by the Democrats in 1988 or Republicans in 1976, depending on who you ask.

Some account it unfortunate to be born into turbulent times, when the leaders we follow seem plucked from our very nightmares and fantasies, and our future is uncertain. But the world is a turbulent place and we see it as a privilege, an opportunity and an adventure to be handed the baton. Especially when so much that is fundamental is converging upon resolution.

Let us humble ourselves, get centered and grounded, and resolve simply to follow our political bliss. Americans are pursuing lots of different projects, and though our paths may diverge and collide, we will need each other by the time we reach another bend in the river.

Meanwhile, there are a lot of fundamental issues playing out closer to home.

For example, Pittsburgh is one of 7 very cool finalists for a huge competitive federal transportation grant…

Vulcan’s investment coupled with funding from the U.S. DOT aims to create a first-of-its-kind modern transportation system that will demonstrate “what’s possible” by showcasing bold innovations, climate-friendly vehicles and technologies that link people to transportation information in ways that will improve quality of life and lower greenhouse gas emissions. (Vulcan)