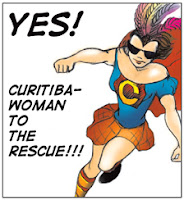 … ’cause Robert Firth is about to ruin, the image and the style that you’re used to.

The last page of the P-G’s Forum, called “The Next Page,” features a bold proposal for Port Authority Transit. It reorganizes the system into streamlined core routes, with short local circulators and a plush Downtown circulator. The authors claim not only that this would better serve riders, but will also save costs on a par with the draconian cuts we’re facing.

We at the Comet are not equipped to evaluate the fine points of the idea, but we find ourselves being persuaded. The staff of Informing Design, Inc., headed up by this Robert Firth, have put together an innovative comic-book style polemic that is neither condescending, irritating, nor easy to refute.

Their proposal is based on a system developed in Curitiba, Brazil, and has been adopted by Washington DC, Los Angeles, and Cleveland. We doubt that such awesome innovations would be welcome in Allegheny County. Besides, there might be start-up costs to consider.

But we strongly urge Mr. Firth and company to utilize this format for delivering pro-active, instead of re-active, policy suggestions; for contributing to thorny foreign-policy discussions; and for delivering endorsements in local political races.

One thought on “Stop What You’re Doin’…”