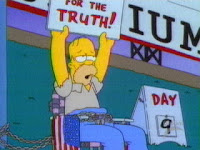 The demonstration against 15 years of incompetence and / or willful ownership negligence will take place tomorrow, Saturday the 30th, during the 7:00 Pirates vs. Nationals game at PNC Park. (LINK)

If you have no interest in the game but would like to check out the protest, frustrated fans will be streaming out of the stadium after the 3rd inning, so you can join them outside around 7:45.

In what has become the go-to MSM piece on the subject, Bob Smizik of the P-G qualifies his support of the demonstration by writing:

Nutting is not a bad person. He is not dispensing social injustice. What he is doing is not illegal, unethical or immoral.

We’re not so sure. In any sporting endeavor, it is understood that the participants are expected to try to win. Adult baseball fans, even if they are already jaded as to the business of sports, bring children to these games who wear mits, expecting to see good examples of sportsmanship.

If a batter fails to run out a ground ball, he gets booed, and for good reason. Especially if a fielder bobbles the throw, and it turns out the batter might have been safe at first.

Kevin McClatchy and Bob Nutting have been jogging for well over a decade. And by the way, guys? This is Pittsburgh.

The Comet will be attending this protest in our Steelers jersey.