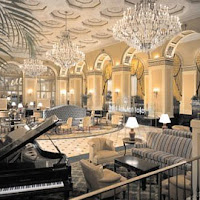 (See MAPQUEST if you don’t believe us)

Buried beneath a lede about a big vacant properties forum Downtown, is a tale of woe from the Hill District. (P-G, Diana Nelson Jones)

“There were supposed to be six more [new houses] across the street” from the ones built in the ’90s, she said. “That was going to be phase two” of a redevelopment plan between the city Urban Redevelopment Authority and the Hill District’s community development corporation. But the vacant lots that were to have received new homes remain vacant.

“Last month, the Redd-up people [city workers] came and did some work,” she said, “but the weeds have grown up again …

Editorial Comment: We’ve never been to a vacant properties conference, but doesn’t $300-$400 per ticket seem a little excessive? Are we raising money for something?

Related Aside: What if there was a much-publicized town hall community meeting — only turnout was low, and no media bothered to cover it? And those that thought they might, decided to write about a vacant properties forum and some weedy properties instead?

One thought on “The Longest Mile”