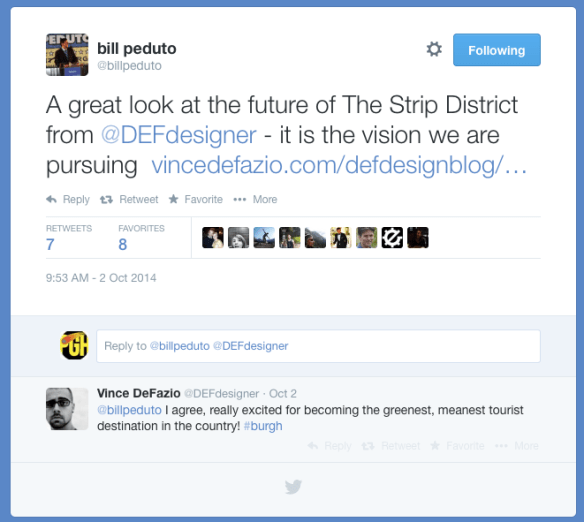 Oh are we. Pursuing what? Looks like the view facing west from around 35th Street. But if we were to “zoom in and enhance”, it sure seems like the produce terminal is still being given a wide, green berth down to the David McCullough Bridge at 16th:

Acting as a catalyst, the Allegheny River green boulevard project [*] has closely followed in the footsteps of the Produce Market.  In fact, Buncher Co. wanted to rip down a third of the building to make way for the green boulevard after initial plans were released in their report. While it isn’t directly connected back to the building itself, it can have the same – probably greater – impact that the Markets are expected to have.  This green avenue would be the first of its kind in Pittsburgh and one of the real pioneers in the country, it could serve both daily commutes and bicycling tourism which has soared here with the completion of the GAP trail system.  Seen as a way to extend the riverfront presence back into the Strip District and create more recreational space along the waterfront, this ambitious plan calls for new housing, bicycle trails (have been implemented), new public transportation infrastructure based off of existing rail lines, retail space and a natural buffer between development and the river to continue growing the restoration efforts that have been crucial to the rivers becoming clean. (Vincent DeFasio)

What do we think, Cometmaniacs?

Stuff like this does attract people. I would not even object to a few food trucks or other vendors very sparingly arrayed down the pathway, or some busking areas.

13 thoughts on “The Strip District will have So Many Trees!”