With its 6 bedrooms and bathrooms; its “huge formal rooms,” domed breakfast room and art deco bar; its in-ground swimming pool and several garages; and its lions and goddess statues, the old Stern family property has sat empty for a long time.

The estate at 1830 Beechwood Blvd. rests near the corner of Forbes and Dallas, just south of Homewood Cemetery and west of Frick Park. Built of white painted bricks sprawling smoothly into a vast north-facing hillside, the emptiness of the bomb mansion now joins its gothic fixtures in lending it a haunted aspect.

No one with the money to purchase such a single-family dwelling, upgrade it and maintain its “manicured grounds” really wants to reside in the heart of the city, I guess. A construction company plans to demolish it all and develop eleven (11) new free-standing 3-4 bedroom condominiums to market at $900,000 apiece — for a grand total of just under $10 million.

Meanwhile, I live about 80 feet diagonally up the wooded slope, high atop Mount Privilege, facing the opposite way. I don’t know how clearing, leveling and building space for about 40 souls to live, work and play is going to affect the topographical stability of my hillside. But I like my 1-car garage shed where it is, so I had to go to the community meeting.

At the Squirrel Hill Urban Coalition as everywhere in Pittsburgh, a little old lady wearing a shawl boiled down the main issue: the developer is asking the city for a zoning change from Very-Low Density to Moderate Density, skipping over Low Density entirely. And maybe that’s too aggressive?

In fact, the developers propose to pack homes in so like sardines, they need to ask for a whole separate zoning variance just to crowd the freestanding structures in a little closer together than ordinary.

Stormwater runoff was another widespread concern: the developer explained how he’d direct flows into a large new underground tank, to more slowly disperse it into City sewers.

Somebody inquired over affordability, which was largely academic, but that’s how we discovered these 11 units were selling for almost a million dollars apiece. 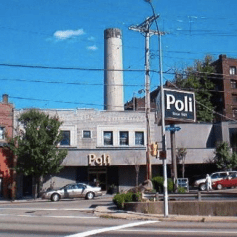 During the second half of this community meeting, and pertaining to a stretch of Murray Ave. further south, closer to Greenfield, an architect is proposing a new complex with 39 market-rate residential units and 60 parking spaces at the site of an old funeral home. This unleashed another round of traffic anxiety, as well as specific concerns from some nearby businesses and wellness centers.

That is just up the street from the site of the fateful Poli’s fire, now an empty corner lot at the Murray, Forward and Parkway East intersection. That’s due to be redeveloped at least partially as affordable housing — which is great, except how there are no big, fancy restaurants in Squirrel Hill anymore.

Speaking of convenient Squirrel Hill fires, 800 feet south of me and my hillside situation, the Pittsburgh Parks Conservancy just unveiled its brand new $19 million LEED-platinum Frick Environmental Center — at the site of the old Frick Nature Center, before that one leapt ablaze.

Solar panels now loom over the parking lot, and geothermal ducts provide the center with cool water and energy. Hundreds of trees were torn down during construction, then thin new ones planted within each stump. A water feature carries storm runoff beneath a building access footbridge, somewhat suggesting Fallingwater, which then spills into new marsh lands. Refuse bins invite us to resign our waste to a Landfill, Recycling or Compost. 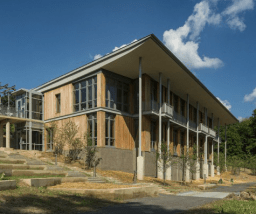 The building itself is a glassy, boxy small events center, which includes new offices for the Parks Conservancy. It holds a kitchen, reception areas and a “PNC Classroom” which might easily be mistaken for a large conference room. Its stairwells and lower level are Brutalist, the geothermal wizardry all tucked away. An outdoor children’s amphitheater is a nice touch, at little apparent cost.

The old Nature Center was a very modest nature museum. The new Environmental Center is an events hall and a grandiose demonstration — sort of a mini-David L. Lawrence Convention Center.

The $19 million price tag of this Frick Environmental Center doubled fitfully from the original $9 million envisaged in 2012. Of course, the Pittsburgh Parks Conservancy is a nonprofit and a philanthropic network, which funds park projects and programming in the City in exchange for some say over how the parks system is run. The Conservancy recently for example had consultants draw up a green stormwater management strategy that would fix notorious, longstanding flooding problems in Greenfield close to Schenley Park. That plan would cost $7.5 million to implement — less than half of one Frick Environmental Center — though it is unknown how soon such money will be made available for flooding relief.

Ask around whether there is any room to restore Panther Hollow Lake by daylighting its stream, while also installing an innovationary, autonomously vehicular “Oakland Transit Connector” — and whether the mission to fund the two projects is or ought to be lumped together. Answers differ.

In Squirrel Hill South, demand for higher and higher property values is already satisfied to the point that homeowners are concerned over sustaining neighborhood livability, which underpins such value in the first place. In Greenfield on the other hand, all I can say is Our Mayor is missing opportunities by hanging out with next gen industrialists more often than his working class constituents.