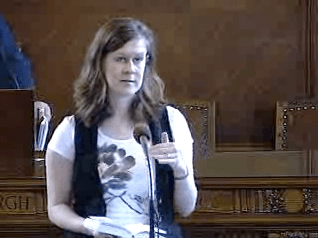 Things didn’t go as anyone expected, much less predicted, in terms of the process of confirming or rejecting the Mayor’s questioned nominations to the Citizen’s Police Review Board — even though lots of folks obviously spent a lot of time arranging their Stratego pieces across the board.

When Mrs. Harris announced she had decided to delay a confirmation vote on the nominations, council members Bruce Kraus, Bill Peduto and Doug Shields challenged her authority and demanded that council take a vote on postponing the confirmation proceedings. (P-G, Joe Smydo)

At 2:43 in the PM — after a long procedural debate and discussion featuring Yvonne Schlossberg from the City Law Department (pictured) — Councilman Daniel Lavelle moved to read the Mayor’s nominations to the Board into the Council record, and then to postpone (not table) the vote (and the discussion) upon them until Tuesday, July 27th (after Council possibly fixes the nominating process). Councilman Bill Peduto seconded this arrangement. It passed 8-0, and *-CORRECTION: Burgess, though off-camera, voted aye; someone else was absent or abstained.

Councilman Burgess then moved that a public hearing be scheduled on the CPRB issue now, so as not to further extend the process. Councilman Shields made sure to recommended this be broadcast on Pay Per View cable television. This passed by unanimous assent.

I suppose it’s worth mentioning also that Shields and Lavelle each introduced bills seeking to fix up the nominating process, and that Burgess has legislation already on the table which among other things would affect that board’s powers.

IDEA: If it weren’t for the G20 — and the notable lengths to which Chief Harper appears willing to go to defend either the City’s legal liability or the discretion of his riot officers — very few of us would be contemplating the CPRB let alone obsessing over it. Nobody ever accused it of being an overly consequential organization until just now.

2 thoughts on “This Week in CPRB: Nothing Happens. (*-CORRECTION)”