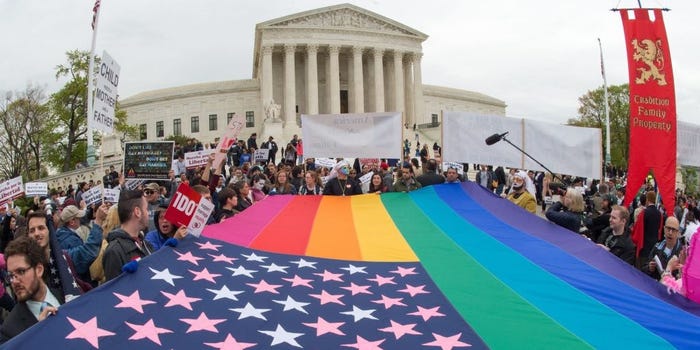 “Out of the night that covers me,

Black as the pit from pole to pole,

I thank whatever gods may be

For my unconquerable soul.

In the fell clutch of circumstance

I have not winced nor cried aloud.

Under the bludgeonings of chance

My head is bloody, but unbowed.

Beyond this place of wrath and tears

Looms but the Horror of the shade,

And yet the menace of the years

Finds and shall find me unafraid.

It matters not how strait the gate,

How charged with punishments the scroll,

I am the master of my fate,

I am the captain of my soul.”

Yesterday, as we celebrated another long-overdue affirmation of our LGBTQIA+ brothers, sisters, friends, loved ones and co-workers, the Pittsburgh Comet dares to take this moment to show our appreciation for a Supreme Court supermajority who got one right, but, just as we did seven years ago, continue to draw attention to what the high Court got wrong, what it consistently gets wrong, and why we have so much work left to do.

Most of us, if we’re intellectually honest, saw the Supreme Court’s 32-page opinion in Bostock v. Clayton County, Georgia, as something of a no-brainer. Associate Justice Neil Gorsuch, an arch-conservative Trump appointee and member of the Federalist Society, managed to sum up the obvious in the first sentence of the third paragraph of the opinion:

“Few facts are needed to appreciate the legal question we face.”

Almost exactly seven years ago, when last we celebrated, the issue was the Court’s takedown of the heinous federal Defense of Marriage Act on the basis of “states’ rights”, and now comes the Court again, telling America this time that employment discrimination on the basis of “who you are” or “who you love” must also be eliminated, as these bases, too, are patently unconstitutional. This time, however, states’ rights wouldn’t suffice as a valid intellectual or legal basis for this action, so the Court’s supermajority reached for another hallmark of conservative legal ideology: textualism.

I’m sure wherever the late Associate Justice Antonin Scalia is, whose seat on the Court Associate Justice Gorsuch was handed after it was stolen from the then-Chief Judge of the U.S. Court of Appeals for the District of Columbia Circuit, Merrick Garland, he must be roiling in his grave. Gobbledygook.

And, for 4 years, all we could muster the strength to say was: 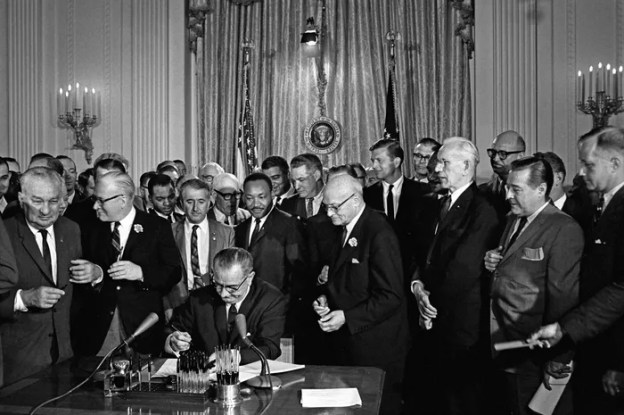 Justice Gorsuch reminds us that regardless of whatever might have inspired the imaginations of the old, White (and almost all), men who passed the Civil Rights Act of 1964, irrespective of the fact that questions of who one is or who one loves were nowhere to be found, WORDS. MATTER. When the plain language of a statute is clear, the Court needn’t look to the “intent of the Framers” or whatever other originalist legal fallacies this Court has sometimes reached for to justify some of its other past sins (Dred Scott, Plessy, Heller, we could go on for centuries here…)

But as was stated in the lede, while we are truly, truly grateful that many of our friends, loved ones and co-workers have, finally, had more of their Constitutional birthright affirmed, we would be horribly remiss if we didn’t remind ourselves (and you), as we did seven years ago, that the Civil Rights Acts of the 1960s established several other protected classes, and one, in particular, expressly written into the Acts, has, far too often, received very short shrift, or in many cases, none at all. 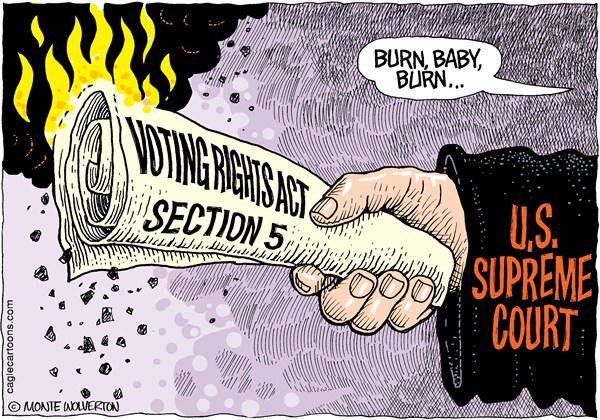 The very same Court which, in June 2013, first struck down DOMA as a federal intrusion into the states’ right to regulate the marital function, and two years later, removed all doubt by decreeing same-sex marriages legal across the fruited plain, put out the bunting, declared “Mission Accomplished”, and struck down § 5 (and by implication, § 4) of the Voting Rights Act of 1965, the legislative implementation of the Fifteenth Amendment. 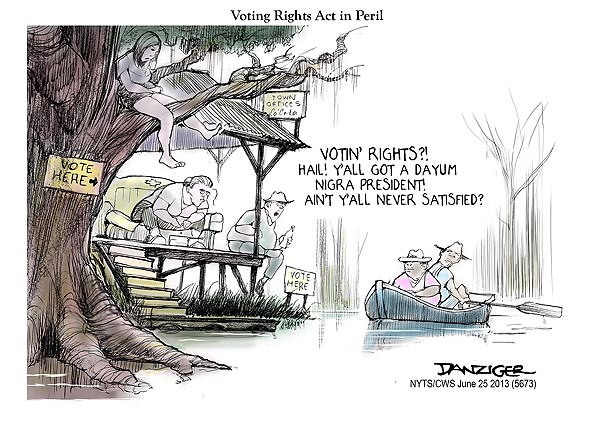 Prior to the Court’s holding in Shelby County v. Holder, whenever a Southern state (and a handful of Northern counties) wanted to or was legally required to (read: redistricting) change any process or structure that might have an effect on the right or ability of African-Americans to vote freely, those changes had to be approved, in advance (“pre-cleared”) by the Voting Section of the Civil Rights Division of the United States Department of Justice. The mere existence of that mandatory review prevented many bad acts from being considered. 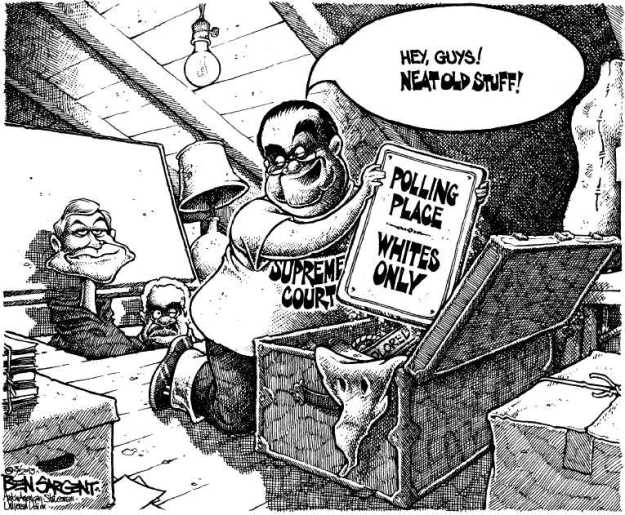 As was observed at the time, not 24 hours after that Court ruled in favor of striking down the preclearance provisions in the VRA, the law that provided any protection for the right of African-Americans to vote (because things were ‘better’ in the old Confederacy, America elected an African-American as its President), many of the very states the law was enforced against went right back to their racist old ways. Oh, you don’t believe us, just ask Stacey Abrams.

And so we resolve to keep the spotlight focused on our friends, loved ones and co-workers who haven’t had much success in recent years getting the Court to vindicate their rights. What they have seen has been the persistent, pervasive contraction of those rights, and that is what African-Americans have suffered for several decades now.

Yesterday, the Court declined to review a number of cases which hinge on, perhaps, one of the most insidious Court-created shields to government liability most lay observers have ever seen: qualified immunity.

What is qualified immunity?

“ Qualified immunity means that government officials cannot be held accountable for violating the Constitution unless they violate a “clearly established” constitutional rule. In practice, that means that government officials can only be held liable if a federal court of appeals or the U.S. Supreme Court has already held that someone violated the Constitution by engaging in precisely the same conduct under precisely the same circumstances.”

For example, if a pregnant African-American woman is pushed down a flight of stairs by a police officer, all the while hurling out the “n-word” and the “b-word”, she couldn’t maintain a civil action against that officer in the federal Courts unless the Supreme Court or the appellate circuit where the District Court she attempts to file her civil rights lawsuit ruled in favor of a pregnant African-American woman who had the exact same thing happen to her. Such a rule strains credulity, but for almost as long as the Civil Rights Act has been a law, this Court-created limitation has existed. 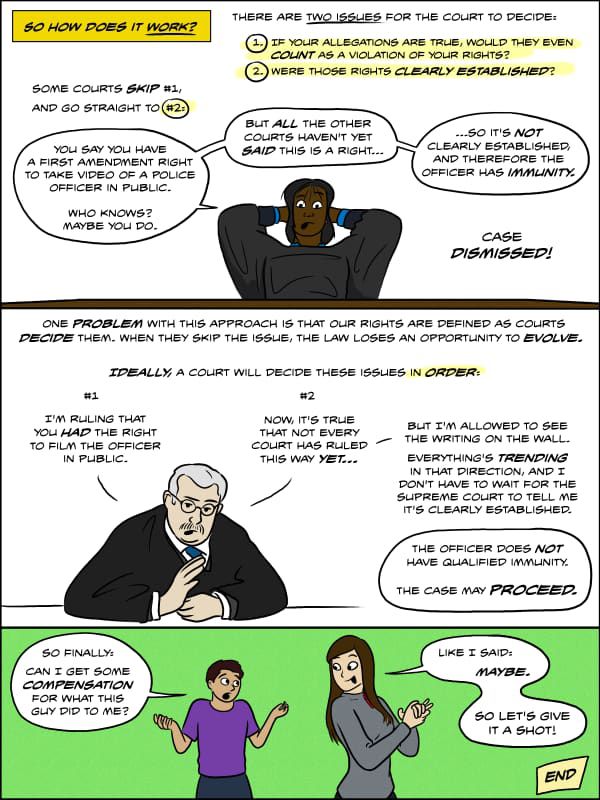 The fact is that this legal loophole frustrates the very laws designed to bring some measure of justice to African-Americans who are mistreated under color of law by a government employee.

Title 42 of the United States Code (42 U.S.C. § 1983). Section 1983 provides an individual the right to sue state government employees and others acting “under color of state law” for civil rights violations. Section 1983 does not provide civil rights; it is a means to enforce civil rights that already exist.

Most notably, this federal law has another name. In fact, the law bears the name of the racist, terrorist group at the very heart of the reason the Reconstructionists who controlled Congress after the Civil War had to pass it in the first place: 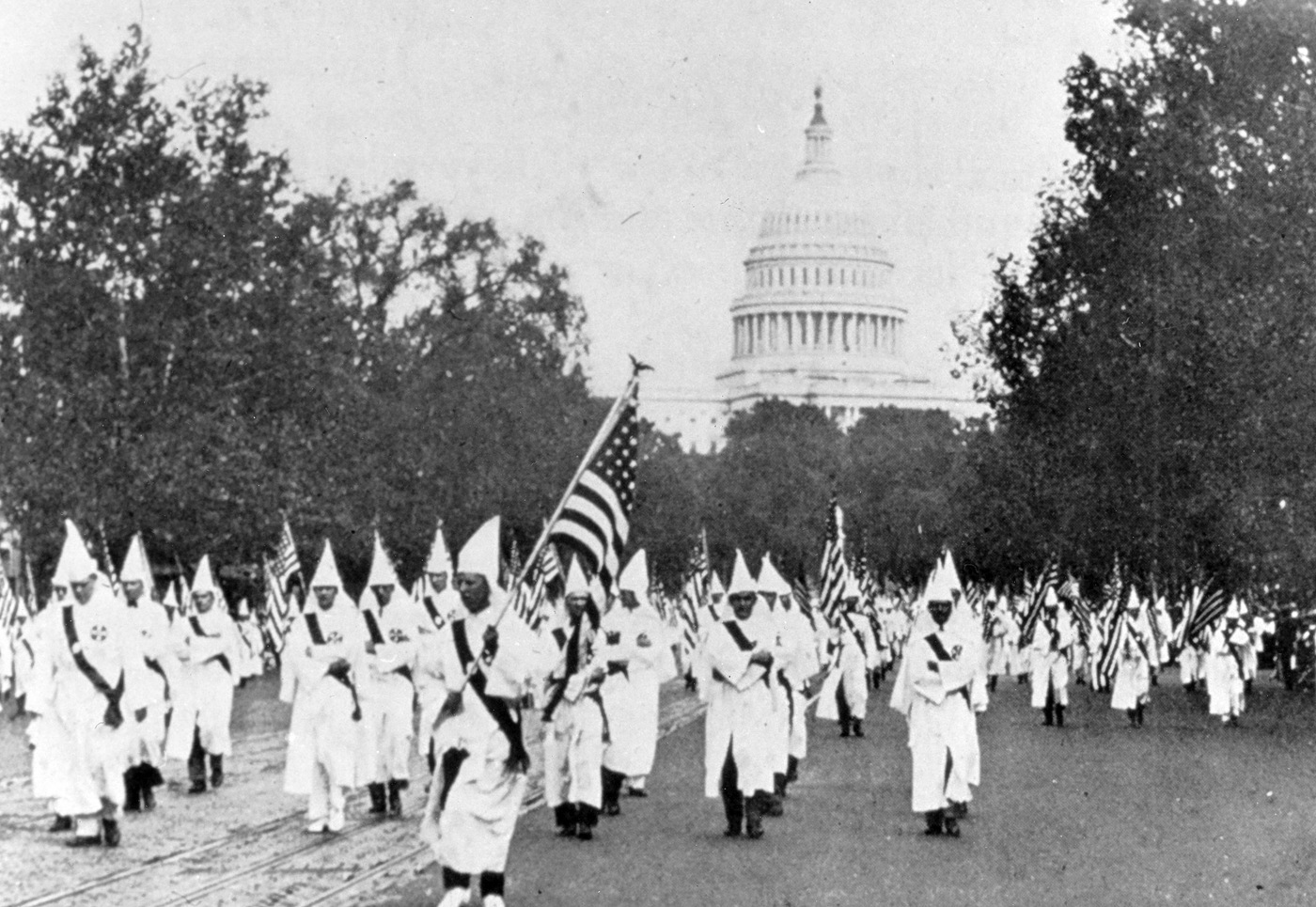 So effective a shield qualified immunity has become, many potential litigants (read: African-Americans mistreated by government officials, and tragically, the estates of many of them) decide not to seek justice in the courts altogether. And since civil rights lawyers, promised by 42 U.S.C. § 1988, to payment of their reasonable fees for taking these cases, which, of necessity, Congress had to enact, lest no lawyer in private practice could afford to take these cases, only get paid if the lawsuit ends in a judgment or settlement, these attorneys get nothing if the case is dismissed by a federal court on the grounds of qualified immunity. So for many African-Americans who need any form of justice when a state government employee (which includes employees of local governments) violates their rights too often find the doors to the courthouse effectively padlocked.

Congress can, and must, amend the Ku Klux Klan Act to remove the doctrine of qualified immunity. If not, as Congress refused to do with DOMA, same-sex marriage and employment discrimination against our LBGTQIA+ friends, loved ones and co-workers, then only the Court can remedy this tragic injustice. Even if Congress refuses, which it has proven itself wont to do, the Court should reverse itself anyway.

It is worth noting that, even as many Americans found themselves dancing in the streets in jubilation last night, many more Americans have taken to the streets, day after day, marching for the very rights which were, in fact, the reason that in 1868, the Constitution had to be amended to add the Thirteenth, Fourteenth and Fifteenth Amendments in the first place, and why the secessionist states were required to ratify the Amendments as a condition of readmission into the Union. These Amendments are the Constitutional authorities Congress relied upon in passing the Civil Rights Acts of 1871, 1964, 1965 and 1968.

Ever wonder how exactly it is that corporations became “people”?

In the 152 years since the ratification of these Constitutional Amendments, corporations, foreigners, people (now including the LBGTQIA+ community) and almost every other distinct group of persons, who felt that their Constitutional rights had been deprived or abrogated, sought remedy in the Supreme Court of the United States. The Court listened and if it found that their rights had, in fact, been violated, gave them relief. But time and time again, when the one group for whom the Amendments were framed and the statutes were enacted, says to the Government, “What about us?”, more often than not, the Court has responded with, “We know you’ve been mistreated, that your rights have been deprived you, but you have to take that grievance down the street and ask Congress for help. That is not our job.”

For irony’s sake, Utah Senator Mitt Romney and Missouri Senator Josh Hawley, in reaction to Bostock, said exactly this very thing about the Court’s ruling yesterday, which finally extended the Civil Rights Act’s protection against employment discrimination on the basis of sex to those who had previously been discriminated against because of who they are or who they love not conforming to some archaic, conjugal view of the world.

The time for the affirmation of everyone’s rights faces us. No longer can we allow any among us to hide behind their privileges while the innocent are harmed, starved, murdered or assassinated, especially not by some government.

Time has proven, from 1619 to this very day, that the souls of our African-American friends, loved ones and co-workers are, indeed, unconquerable.

But the time for bloodied heads, tears shed and horrors endured must end. The time for half-measures and talk are over.

A young James L. Farmer, Jr. said, in his debate performance against the vaunted Harvard debate team in 1934, this:

If the Constitution doesn’t hold the same meaning for each and every one of us, then many of our young people are beginning to show America that mere civil disobedience is no longer enough, which leaves but one logical, inexorable conclusion… 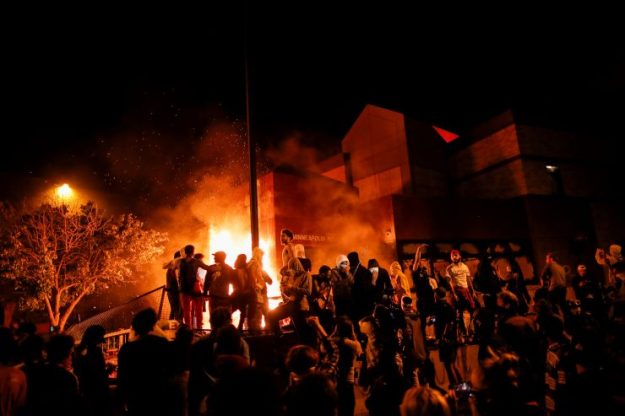