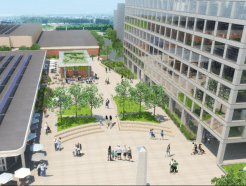 Nova Place. The old Allegheny Center. Feast with your eyes, upon the drawings!

Super that we’re doing something about Allegheny Center after all these years. In the depths of 20th century American “urban renewal”, that was somebody’s idea of a classical Athenian paradise adjoining an indoor mall. A wide public crossroads, planned centrally, a lot of tall apartments for residential density, with cultural resources and libraries and sculptures within, and tables for chess and enlightened sociability.

Allegheny Center has long been regarded as a disappointment. It is known. Whether that is fair or not may turn out to be a bit more nuanced.

But now the City is doing away with much of that. The Peduto administration is proposing turning it into an innovation works, a 21st century technology hub, a high-end campus, featuring the “right kind of office space” and restaurants, but with an emphasis on a new urban fabric with community reconnections.

Even still, the North Side street grid will not reemerge — re-Complete? — and it is all still very dirigiste, under the stewardship of Faros Properties.

We are reinvesting in Allegheny Center, to be sure. Updating it. But are we actually changing what it is? Who is to say? It is so early…

And germane to this discussion, apropos even: Pittsburgh’s tech start-up scene does not yet rank, quantitatively.

Right now, there are surely very few bona-fide Billionaires walking around the City of Champions, idly curious, considering wagering a few tens of millions of dollars on a ragtag band of business-plan heroes. That is, compared to Miami, or Silicon Valley / San Jose, or… or Austin.

Yet in terms of Pittsburgh’s potential, in that regard? Possibly…

This is a for-real possibility, a likelihood even. The Comet can see it clear as sunshine: Uber debuts its autonomous car system with footage and data from Pittsburgh’s mean streets, steep hills, outlandish intersections, bicyclists and potholes. If chauffeur droids can make it here, they can make it anywhere. The robots will disrupt the economy, and naturally it will start at the Forks of the Ohio, because this is conquest.

Will Pittsburgh workers be manufacturing the car-bots? Probably not. The wizards of the tech industry will do exceedingly well; their agents, lawyers, dentists, and restauranteurs will be doing brisker business in proportion; and a certain greater number of drones will be required to feed them burritos and sell them pants.

That is your economic development news. What else is up?

Call us obtuse, but we think murders are up recently because murderers are deciding to kill more people. Our culture remains pretty messed up, tensions generally are rising in this world, absurdities persist, and perhaps sometimes depravity comes in waves. The apparent annual increase in mortal violence may be random, may be cyclical, or may be an early indicator of a general slow increase.

The Comet is not buying any conspiracy theories about police morale, that is for sure. We believe the technologies and tactics which Pittsburgh police are rolling out are bound to defeat 21st century challenges. If anything, we feel a sense of urgency to get all the parts into place, well-trained and field-demonstrated, before some next chaotic and tragic incident threatens to turn into a conflagration.

The old Police contract is being renegotiated. We were hoping for a battle over something more interesting, such as policy, but this is about money.

Police officers deserve a raise, but the city is still skirting the precipice of dire financial distress. Further, it is known that the training and caché of a City of Pittsburgh police officer — not just initial training, but all that ongoing and highly specialized — makes that officer extremely valuable on the open market, as side-details or as a consultant. The job of a big city officer demands trade-offs, but our regional security economy is a system that works.

And incidentally… during the Spring 2015 CPA, officers of varying responsibilities made occasional pleas for a whole new, state-of-the-art training facility — like many of those in very comparable cities, in fact —  and certainly defended their need for good equipment. But nobody ever suggested that their present facilities are in any way “deplorable”, and nothing that I saw or that they indicated made it seem that way.

Conditions at the jail, now? Those might need improvement.

Iggy Azalea is headlining Pride®, the annual Lesbian Gay Bisexual Transgender (LGBT) celebration in Pittsburgh. This is upsetting to many, as Iggy has not recovered from a series of unfortunate statements which aggravate divisions in LGBTQIA+ communities on matters of intersectionality and classism. 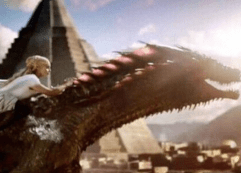 This blogger would only add that Iggy Azalea seems to have purchased and adequately produced one semi-catchy hit. That aside, she evinces a rather uninspired muse with a limited and strenuously commercial appeal.

For a festival whose slogan this year recalls the Beatles (“All You Need Is Love”), this is music for a narrowly-tailored audience. Now, maybe you think we are an old fuddy duddy, and that is more than fair. But if we were in charge of PrideFest, we would move heaven and earth to book The Warning. Now, there is a band that bleeds courage and optimism, and has a catalogue primed for WDVE.

We digress. The news is that many locals are connected in being fed up with how wealthy, CIS-gendered white men can have a narrow and dominating perspective, even in progressive spaces. Too much of that begets an ossified cluelessness.

Just last week, as a matter of fact, we discovered that we have a lot of serious convictions against transphobic bigotry. While that newspaper column was shocking and disturbing to many, to others it merely reinforced the sense of Pittsburgh’s stubborn lack of diversity.

But this time, again, it appears we’ve had about enough. What a resilient, compassionate people we are becoming!

These eruptions to overturn fearful, retrograde, noncooperative cultural attitudes are certainly most welcome, though in a better world they would not be necessary. The Comet is not sure if this widespread humanitarian indignation is yet ripe to be aimed at our 19th century political infrastructure, but these are promisingly progressive developments.

11 thoughts on “Transforming the ‘Burgh: Riding this Beast”