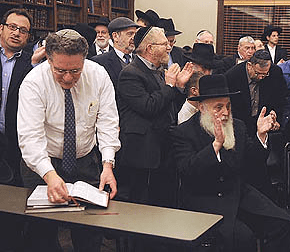 We tried to get Comet Senior Political Analyst Morton Reichbaum engaged on the subject of Vetogate, but he wasn’t interested.

“You know who I’m starting to get tired of?” he offered instead. “That Dan Onorato.” It was for the same reasons taken up by PghIsACity.

“First he says the drink tax money is for transit, and now all of a sudden he’s changed it to something else,” was Mort’s take.

Now out of nowhere there’s this:

Where are you on this one Mr. Onorato? Where is your leadership? You want to be our next Governor but you can’t even protect county residents from dirty restaurants on McKnight Road in the North Hills. Why haven;t you made a public statement on this? What are you hiding from? (Pgh Hoagie)

Me? I’m still sore about Goose Auschwitz, but no one cares about me. My point is, he doesn’t seem to have his “backyard” locked up, as it were, which makes life challenging for a candidate from Western Pennsylvania. It might be time for the media to provide a real think-piece about this Wagner fella who’s been out of town on business.

Council President Doug Shields said council should vote on any agreement, and that it’s appropriate for the ICA to oversee the fund.

Mr. Lamb said the draft agreement wouldn’t meet the city’s goal of using the $45.3 million now to take later-year debt off the books.

Sounds like this one has matured past the Quixotic Patrick Dowd Jag stage.

MORE: The Slag Heap flags the ICA for inconsistencies.

Pittsburgh Lesbian Correspondents has caught a cybercold (cured!), but they were on to another very interesting story. From an e-mail Sue circulated:

Pressure is mounting from the right wing on local “conservative” County Council districts (probably the AFA of PA and their ilk with the usual fear mongering) to withdraw sponsorship of the legislation [to extend anti-discrimination protections to include sexual orientation]. Please pay attention to this story. More will unfold this week.

Turns out the American Family Association did stick their beaks in, and got three council members to withdraw their support. For you Facebookies out there, a group has begun Councilman Michael Finnerty Needs to Hear from you on Gay Rights.

Might as well do this one up. The last one (remember Blog for Equality Day?) went real nice.