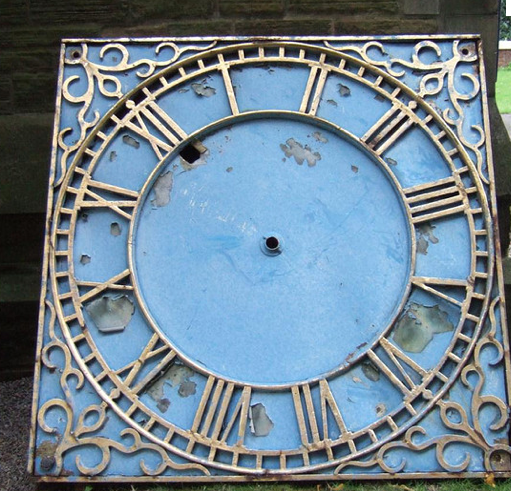 This is always most complex.

The City last week diverted the next five years worth of parking tax revenues from certain new Hill District parking lots (not to exceed $2 million) from the City’s general fund to the Urban Redevelopment Authority and the Sports and Exhibition Authority, for use in projects related to what appears in the Hill District Master Plan.

That heated argument did not make it to the final round, perhaps having to do with this measure’s similarity to the Pittsburgh’s notable 2010 State Pensions Takeover Avoidance Act, of which all Council members were supporters.

Yet at final action,

“It strays away from our usual capital budget process,” she said. Ms. Rudiak said she would, however, be willing to vote for a capital budget amendment that allocates money to Hill District projects. (P-G, Joe Smydo)

In other words, she is saying there is a time and a place for neighborhood groups to ask for limited City resources for special projects — and it is done all at once, at the end of the year, so we can prioritize needs across town, in a political process, so that everyone who manages to be in power gets a fair cut of the action.

Which is normally fine, if you discount the great drama surrounding Pittsburgh’s Hill District and the hope that it provides alongside Downtown. I must say I am deeply impressed that the Hill is now by so many being considered a special and unifying priority — both for its past involving a now-demolished arena, and out of recognition of its recent arduous campaign for direct benefits in conjunction with its new arena. A cause which once brought African-Americans and organized labor powerfully together.

But let’s take a look at what is in today’s Greater Hill District Master Plan, whose existence, purposes, processes and funding were provided in that 2008 Community Benefits Agreement. At a glance it foresees: 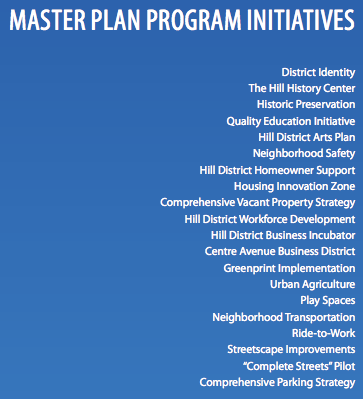 To give some perspective, it is costing $1.3 million simply to “stabilize” the New Granada Theater, which would one day contribute towards some of that material. Things cost serious money. This master plan looks like it could consume many hundreds of millions of dollars.

##
So with the pittance the City has brought to the table, what comes first? Will it go to more planners, consultants, and designers in anticipation of those bigger-ticket items way down the road? Will it go directly to entrepreneurs bearing sound-seeming and strategically relevant business plans? To non-profit and social entrepreneurs?

As provided in the community benefits agreement, the Master Plan was guided by a steering committee. It included folks from many different government offices as well as One Hill, the Hill EDC, the Hill District Consensus Group, Crawford Square Homeowners, Uptown Partners, the Ujaama Collective and some clergy.

However, this wide-open and neighborhood-inclusive body’s determinative role would seem to be at an end.

The city’s contribution will be determined by the URA and the SEA, and the relatively few politicians who constitute them. These folks and their staffs know something about market viability, urban design and project feasibility for sure. We also know that as institutions, these folks once reneged on lofty promises and short-shrifted community integration in such a comprehensive manner, it might well have been attributable to some sort of structural cognitive deficiency.

The Hill District seemed unified in wanting just that. So they’re getting it. Hopefully rolling the dice with The System will work out better this time. But Councilman Lavelle also made mention of this being a “down payment”, and this funding stream might not be all they require and the only way they require it.

What these policy commitments do not provide that the Dollar a Car campaign does are resources that can be used by Hill District residents and stakeholders as we see fit.

Fundamentally, the act of taking the Lower Hill with eminent domain was an act of violating our right to self-determination. The Dollar a Car Campaign, while not restoring order by any means, will at least be a resource that we can use for our own self-determination. (HDCG Front Page)

And video here, including a reality check involving a walkway and a statue.

That is what I’m talking about. The only sound reason to vote against these taxes being diverted for Hill development, would have been to leverage more greater funding streams being delivered, and in ways better suited to the need for community re-empowerment.

Yet even then, if the actual community could not be made keen on that political stratagem, drop it and fight the war on another day.

It is not always easy or natural to vote for something that comes from that other side of the hall, that goes to the URA, that has real imperfections or what have you. But “voted against Hill District redevelopment” has an oddly awful ring to it.

9 thoughts on “Urban Redevelopment, the Race and the Clock”