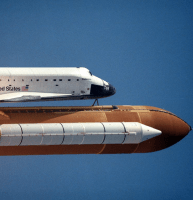 Well, if the federal government is finding it to be of limited use, and we have problems on Earth…

US Airways has decided to close its $32 million flight

operations center in Moon and move the work to Dallas-

Fort Worth, where the new American Airlines will be based.

The move will affect about 600 employees at the center, according to Matt Dinkel, press secretary for U.S. Rep. Mike Doyle, D-Forest Hills. Most of the employees will be offered the chance to transfer, said Todd Lehmacher, a spokesman for American Airlines. (P-G, Mark Belko)

Plus, Pittsburgh International has a somewhat absurd people-mover, which is now integral to the system. It must have seemed like a good idea at the time.

So it was already in somewhat funky overbuilt shape when air travel profitability collapsed. Now it’s allegedly getting shabby.

But let’s look on the bright sides: At Pittsburgh International Airport, there is surely a lot of space available to make customs and security to flow sensibly. Because truthfully, a lot of airports in North America are confused about that. We can help you build a next generation international terminal from the ground up.

Additionally, we can exploit that airport investment with American-made, cleaner-burning natural petrochemical energy.

Nice work. The Comet wonders what those waylaid employees think about… everything.

MORE: Trib, John G. Oravecz: Union president says workers are sad, feel as though they have done a good job. It would be hard to leave home. Null Space on airline bashing. Speaking of radio golf.