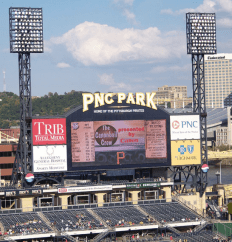 At a dinner party of eight this weekend, it suddenly arose that I was the only “native” Pittsburgher in the group, and how did that make me feel?

Um… gosh, this is a first… I guess that explains some things? No, not really, heh heh! Or, maybe a little.

… and schools and housing.

Because of course. That’s the score, right? Population is the score! We had been losing for decades, and now we’re aching to put points on the board.

Then I recall random articles:

It went from 21 apartments to 18 to 15 to, finally, six townhouses that are likely to need one or two variances for dimensions. (P-G, Diana Nelson Jones)

It was a proposal that divided the densely built neighborhood, with residents on nearby Fisk Street complaining the nightlife on Butler Street already brings alcohol-related issues and parking challenges that would only be made worse by the Thunderbird’s expansion. (PBT, Tim Schooley)

“The biggest complaint everybody has is the noise,” Kelly said. (Trib, Margaret Harding)

Mr. Burgess, who said his district includes more property that would be eligible for the land bank than anywhere else, stepped up claims that the plan as it is presently worded constitutes “carpetbagging” from more affluent council districts and a thinly veiled attempt to hand land over to wealthy developers. (P-G, Robert Zullo)

Let’s imagine Pittsburgh actually attracts 20,000 net new, mostly young, mostly highly educated humans from elsewhere on Planet Earth over the next 10 years —  or 50,000 over the next 20.

Would we be thrilled with that — assuming we don’t get to decide where and how they live exactly, or what they do and when? Or have we actually grown comfortable in our groove / rut? Would we honestly rather keep this splendor to ourselves?

UPDATE: Past is prologue… (h/t Briem)

10 thoughts on “Winning: Does Pittsburgh Want It?”