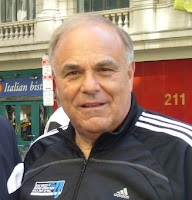 Never mind that our two stadiums themselves are supposed to attract more development in that area — or the casino, or the light rail extension. Never mind that if there were an open land auction tomorrow, entrepreneurs would in fact be banging down our civic door, likely outbidding our present business associates — probably with more interesting ideas, and possibly with more to offer the neighborhood.

Are you familiar with the neighborhood, Mr. Rendell?

No no no — this development, this third or fourth mid-size amphitheater arriving in Pittsburgh in the current cycle, this project that entails a land giveaway, the forfeiture of sorely needed future property taxes, and a hefty state subsidy in the middle of a recession is going to be the thing that attracts more development (can it be private sector development, already?), and it therefore falls into the category of stuff that is always wise.

What if the Steelers‘ agents were asking for $100 million? A trillion? Is there a limit to the fact that “investing” in “projects that attract more development” is “always wise”? And does that maxim and do those labels apply to absolutely anyone?

“I think the public expects the governor of a state whose team is represented in the Super Bowl to attend. I believe that it would be petty to argue that he doesn’t deserve to go,” he said. (P-G, Mark Belko)

I’m trying really hard not to make a fuss about this 2008-2009 Steelers season. New ethics guidelines are being developed, and for that we should be very appreciative. If the new rules turn out right then our public servants will have richly deserved any good times they have had or will have this weekend.

However, somebody just informed us that Pennsylvania is one of only about five states left in the union that does not limit political contributions.

So Mr. Governor — are you implying that six years worth of football tickets and entertainments, and six years worth of campaign contributions not only to yourself personally, but to whatever PACs, causes and candidates you support, does not have any impact on your idea of who deserves “investments”, despite all common sense to the contrary?

You honestly don’t think it’s fair to surmise that your relationship to the coolest team in football helped to generate that great gubernatorial weighing-in (and everything that may come with it) on a local issue? Most of us haven’t heard from you since — why, since you helped strike that deal with the Penguins. Thank you so much, by the way!

So don’t condescend to us. Acknowledge that there are some legitimate issues, give a nod to the unmistakable influence of money and in-kind gratuities in politics and demand campaign finance reform in Pennsylvania already.

Or don’t, and we’ll know what we’re dealing with.