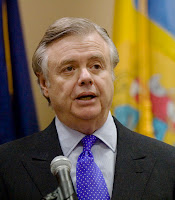 Former State Sen. Vincent J. Fumo was assailed yesterday by a federal prosecutor as a glutton, a liar and a thief with a “royalty complex” who obliterated the line between public service and his own enrichment.

“The corruption in this case, ladies and gentlemen, is as astonishing as it was pervasive,” Assistant U.S. Attorney Robert A. Zauzmer told the U.S. District Court jury in his closing argument in Mr. Fumo’s fraud and obstruction of justice trial. (P-G/PI, Lounsberry & McCoy)

The arguments on Monday were vivid and provocative.

A derisive federal prosecutor ripped into former State Sen. Vincent J. Fumo for a second day yesterday, mocking him for telling “wildly shifting tales” as the FBI zeroed in on how he allegedly looted a South Philadelphia charity. (P-G/PI, Lounsberry & McCoy)

In media interviews when the Citizens’ Alliance scandal first broke, Mr. Fumo said he had gotten no benefit from it.

I would actually be surprised if crimes this lurid and complex broke out on this side of the state. Nobody seems quite that hard-working.

There they stood, Steelers quarterback Ben Roethlisberger and Pittsburgh Mayor Luke Ravenstahl, shoulder to shoulder on the reviewing stand for the Super Bowl victory parade. The politician seemed mesmerized by the reflected glory washing over the athlete.

Both young men, not yet 30, have had fame thrust upon them. One knows about football and little else. The other one was Ben Roethlisberger. (Trib, Joseph Sabino Mistick)

It’s like everybody woke up on Sunday morning and had the same idea: time to be brutally honest about the state of our city’s executive.

And if the city is upside down — more going out than coming in — with no end of this trend in sight, maybe the mayor should be tackling the big question in this campaign: How must the city be reshaped in order to survive? (Trib, ibid)

Reshape the city? Transform something? The suggestion that we need to transform anything is unfortunate. Let’s just keep building big shiny pyramids and mausoleums in the Downtown area either with public money or with prodigious public assistance. As far as the nuts and bolts of government go, let’s keep clinging desperately to our “Pittsburgh Voice” as though our lives and our jobs and the jobs of our committee henchmen and their relatives depend on it.

Then there was this, regarding the a North Shore Amphitheater:

But Mr. Dowd said the goal of improving the public spaces on the North Shore is a good one, and while he’d prefer to spend capital money on “critical infrastructure needs — water, sewer, bridges and public transportation,” he didn’t simply kick this project to the curb. He’d want to see the developers’ feasibility study first. He has his doubts that their assumptions still hold.

But Mr. Dowd was careful to say that the Rooneys, owners of the Steelers, were looking to breathe life into an area that had been nothing but a sea of asphalt for decades and “to the extent we can laud that, I want to laud that.” (P-G, Brian O’Neill)

Translation: YOU DON’T HAVE TO WORRY, BUSINESS PEOPLE! AS SOON AS DOWD GETS ELECTED, HE’S GOING TO DROP THE PROGRESSIVES LIKE THEY’RE HOT! HE WANTS YOU TO BE FRUITFUL AND MAKE MONEY AND NOT SUFFER HIDEOUS PUBLIC SHAME EVERY TIME YOU BUILD A TOOL SHED!

Personally, I’m looking forward to that ongoing tussle. But the reason I linked to the column is because in addition to calling him “Steelerstahl” twice, O’Neill points out that a project Luke strongly supports through actions (though he may not defend with words anymore) is actually very very very silly.

Then of course there was this. It seems to have occurred to a few people at the same time that it is time to cut Our Mayor down to size. It’s a shame it all occurred on the same day exactly because it almost looked coordinated. Folks on the mayor’s campaign like to joke that they’re glad Dowd is running, because it’s getting tiresome having no one to run against besides the media. There could be some bias, but the question would be why? It’s not like the liberal media is railing against a Republican executive. (Is it?)

I think it can be more adequately explained by the fact that the media has to pay attention most every day of the week, and so is in a position to apprehend the reality better than most others. The challenge is that if our reality is that city leadership is unusually weak, directionless and self-serving at this time, that needs somehow to be illustrated with repetition, so that it can be apprehended. Yet at the same time it cannot be presented too simplistically, lest it be interpreted as personal animosity and therefore uncouth.

Fortunately there have been many specific examples to illustrate the truthful general themes, and we can be optimistic that more examples will arise. We simply need to be of a mind to capitalize — it is after all our most vital responsibility to seize upon opportunities to reveal truths to our readers. I am going to lead with my Wreck of the Edmund Fitzgerald gambit. What are you going to do?

5 thoughts on “Wednesday: The New Frankness”